Blaming the Union home ministry for Mr Sharma’s new stint, Ms Banerjee called upon the EC to review it. 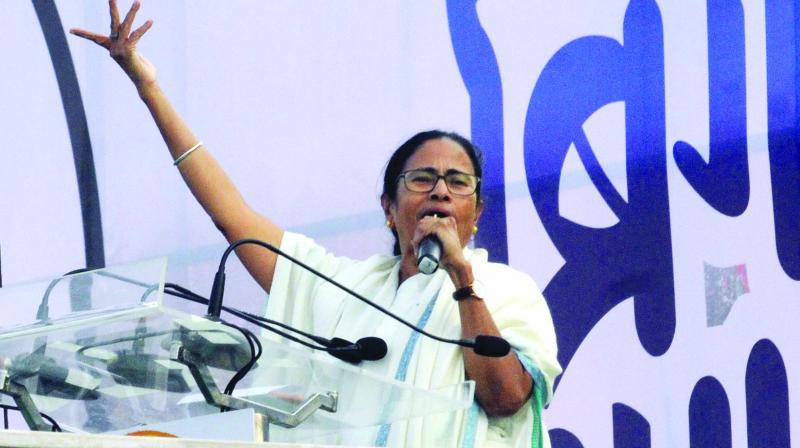 To substantiate her claim, she showed a photo in which Mr Sharma is seen present in uniform at the event organised by Seemanta Chetana Mancha, a unit of RSS-backed Seema Jagran Manch last year in Kolkata where Rantidev Sengupta, a BJP candidate contesting the polls this time, was also present.

Blaming the Union home ministry for Mr Sharma’s new stint, Ms Banerjee called upon the EC to review it.

Meanwhile the CPI(M) also wrote to the EC objecting to Mr Sharma’s appointment. Releasing Trinamul manifesto, the chief minister claimed, “Yesterday I have seen a press note. It is not that I am against any institution. I have the highest regard for all the institutions, including the EC. But I do not blame the EC. I blame the home ministry however.”

“A man has been appointed as the special Central police observer in Bengal and Jharkhand. Who is he? See this photo. The DG is in uniform. This man went to RSS programme. Now he has been appointed for the job. Why? Is it democracy? Is it impartiality? What is this? I respect Khaki dress. It should not be misused,” Ms Banerjee thundered.

She added, “It should be used for country purpose, in the interest of the people and their safety and security. But he forgot everything. He is an RSS man. My humble submission to the EC: Please find out details. The home ministry is misleading. This a deliberate attempt to malign Bengal.”

Complaining against Mr Sharma, CPI(M) Politbureau member Nilotpal Basu wrote to the EC, “It has been widely reported that the DG, who has now retired, participated in a two-day event in Kolkata which was organised by Seemanta Chetna Manch, part of the RSS-backed Seema Jagran Manch. The ECI’s appointment, therefore, is patently questionable.”