The Gorkha Janmukti Morcha said it would attend the August 29 meeting convened by the government after it received an official invitation. 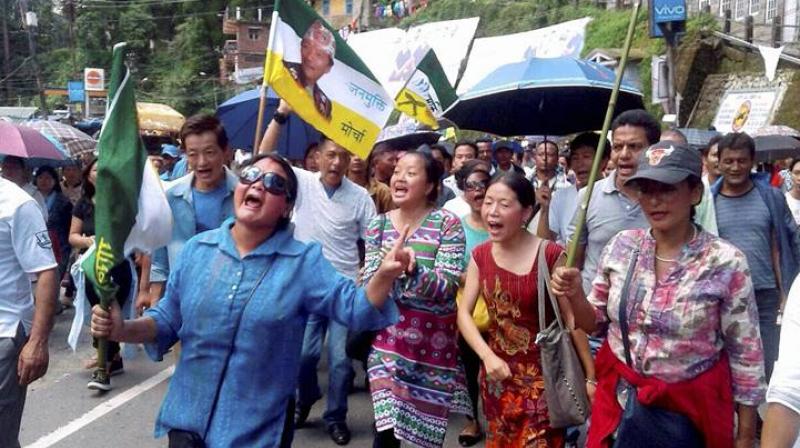 The development comes on a day that the indefinite strike in the Hills for a separate state of Gorkhaland entered its 73rd day. (Photo: PTI)

Darjeeling: The Gorkha Janmukti Morcha (GJM) on Saturday said it would attend the August 29 meeting convened by the  government after the party received an official invitation for the talks.

The development comes on a day that the indefinite strike in the Hills for a separate state of Gorkhaland entered its 73rd day. A senior state government official said, “We have sent letters to various parties including the GJM asking them to attend the talks. Other parties such as the JAP, the GNLF, the ABGL and many other parties of the Hills have also been invited for talks.”

The GJM, which had expressed its willingness to attend the talks, had set a pre-condition that they should be officially invited. The state government has called for talks on August 29 in response to a letter form the GNLF, requesting a dialogue to restore normalcy in the Hills. “As we have been invited now, there is no harm in attending the talks,” a senior GJM leader said.

The GJM on Thursday wrote a letter to the government expressing its willingness to attend the August 29 talks to resolve the Darjeeling stalemate. The letter, written by GJM leader Binay Tamang to Chief Minister Mamata Banerjee, had said, “No other alternative or modified step will do justice to our plight...Other than creation of a separate Gorkhaland.”

Mr Tamang’s missive was preceded by a letter by GJM chief Bimal Gurung who wrote to the state government on Wednesday night requesting a “political dialogue” on the demand for a separate state.