Here for all, we are united, says Mamata Banerjee

I know the atmosphere of intolerance has given this country much pain. But we do not think that way, says Mamata Banerjee. 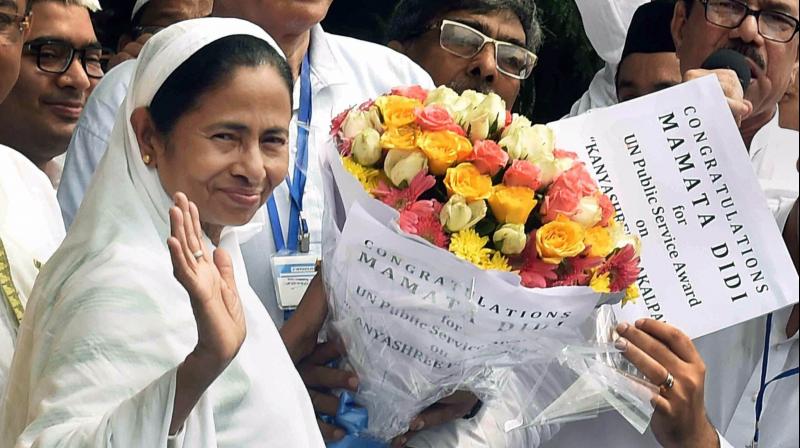 Kolkata: Chief minister Mamata Banerjee on Monday said that an “atmosphere of intolerance” was prevailing all over the country and urged the people to stay united and maintain communal harmony. “I know the atmosphere of intolerance has given this country much pain. But we do not think that way. We are here for all. We are united,” Ms Banerjee said while attending the namaz of Id-ul-Fitr at Red Road.

Delivering a message that the people of Bengal stood united irrespective of caste and creed, she said “No one can break this unity in Bengal as we all here stand united. We are for all and we fight for all. No one will be allowed to create division among people.”

She added that she would keep defending humanity as long as she lived. Urging the people of Bengal to stay united she said, “There are times when one has to show courage and conviction. We are ‘insaan’ first, Hindus, Muslims or Christians later. We work for all, whether they are Hindus, Muslims, Christians, Sikhs or Jains. If we stay united, nobody will be able to cause any harm,” she asserted.

Chief minister Mamata Banerjee leads from the front when it comes to advocating communal harmony in Bengal.

She visits puja pandals during the Durga Puja, attends namaz during the Id, offers her prayers on Christmas at the St. Paul’s Cathedral and also attends the religious programmes of the Sikh and the Jain communities.

“I pray for the good and health and well-being of everyone,” she said while leaving the venue at Red Road.