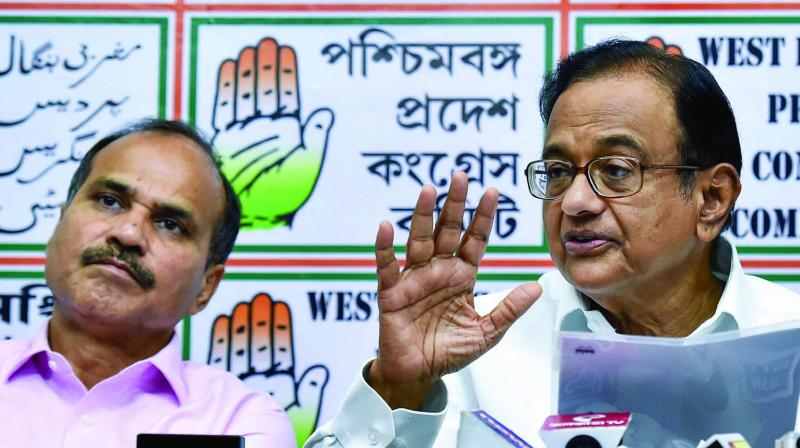 Kolkata: A day after facing the Enforcement Directorate’s marathon questionning in Aircel-Maxis deal senior Congress leader P Chidambaram on Saturday turned his heat on the BJP-led NDA government over the Rafale aircraft deal. Accusing the central government of “bypassing” the defence procurement procedure and several committes he sought answers to a volley of questions including three-time hike in each aircraft’s price.

“What was the procedure followed to enter this agreement? There is a defence procurement procedure which was completely bypassed. There is a contract negotiation committee which never met over this deal. There is a price negotiation committee which was never called to meet over it. And above all there is a cabinet committee on security which has to approve any defence purchase of the size,” Mr Chidambaram said at a press meet at Bidhan Bhavan, the West Bengal Pradesh Congress headquarters.

He elaborated, “While the UPA contract price per aircraft was `526 crores, the NDA contract price is `1,670 crores. If these numbers are correct, will someone explain why the price has gone up three times? The answer is this is a secret agreement and we can not reveal the price. I am revealing the price now. What is the secret about it? It is there in Dassault report....the annual report of the company that 7.5 billion Euros which works out to `1670 crores for each aircraft.”

He added, “These are the questions to which there is no answer so far at all.” What is worse is the government continues to maintain that the price can not be revealed. According to him, when the UPA contract was negotiated, an workshare agreement was made between the HAL and Dassault under which the offset obligation of Dassault would be performed by the HAL. “In all right you entered into a new contract with Dassault. But Dassault was given to choose the offset partner. And Dassault has chosen a private company as the offset partner,” Mr Chidambaram alleged.

Former finance minister Mr Chidambaram further  claimed, “So HAL was completely kept out of the offset obligation. Under the UPA agreement, technology was to be transferred to the HAL. And HAL was to make 108 aircrafts.”

He further added, “But once technology is transferred to the HAL, the HAL’s technological capability improves and for future the HAL can use that technology or build in the technology. Under the NDA agreement there is no transfer of technology to the HAL. HAL has been completely kept out of the arrangment.”