The theme of this year’s yatra is Ramanuj Acharya, an exponent of Vaishnavism whose 1,000th birth anniversary is being celebrated this year. 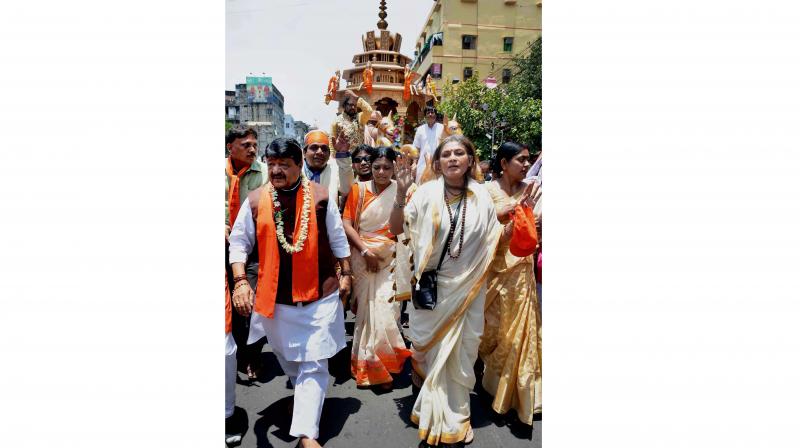 Kolkata: Rains failed to dampen the spirit of more than 1,000 devotees from 50 countries  who were tugging the rope of decked-up chariots of Lord Jagannath, Balaram and Subhadra during the annual Rathyatra hosted by the Iskcon here in the city.

In the absence of chief minister Mamata Banerjee, who is on a tour to the Hague on a UN invitation, state panchayat and PHE minister Subrata Mukherjee, Kolkata mayor Sovan Chatterjee and Trinamul Congress MP Subrato Bakshi flagged off the Rathyatra.

Devotees from different corners of the globe sang and danced to the beats of cymbals and drums moving through the streets of the city. The theme of this year’s yatra is Ramanuj Acharya, an exponent of Vaishnavism whose 1,000th birth anniversary is being celebrated this year.

The chariot passed through Minto Park, Sarat Bose Road, Hazra Road, S.P. Mukherjee Road, Exide Crossing, J.L. Nehru Road, Outram Road to the Brigade Parade Ground, where it would be kept till July 3. At Mahesh, in Hooghly district, where the festival is considered to be the second oldest after Puri, Rathyatra was also celebrated with traditional fervour and enthusiasm.

The Iskcon Rathyatra was inaugurated by Calcutta HC justice Rakesh Tiwari, sweeping the ground before the cart of Lord Jagannath before it proceeded, as is custom. Close to one lakh people pulled the chariots.