GJM to let vehicles ply on Id for 12 hours

The Morcha leadership announced that transport services would be normal from 6 am to 6 pm with the Muslim community celebrating Id. 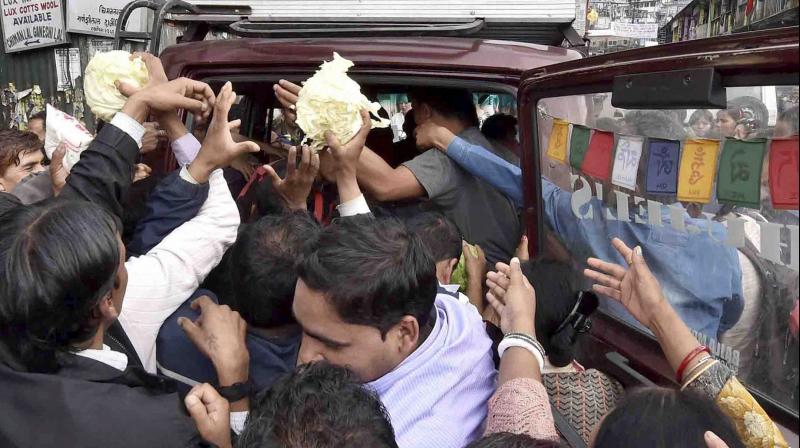 Kolkata: On a day the Gorkha Janmukti Morcha (GJM) announced a few relaxations in their indefinite bandh on Monday in Darjeeling because of Id, violence erupted in Siliguri in the plains. Students in Siliguri who held a counter-protest rally against the Morcha’s demand for a separate state ransacked some cars after they faced resistance from the police when they tried to forcefully go beyond the area earmarked for the rally.

The Morcha leadership announced that transport services would be normal from 6 am to 6 pm for 12 hours with the Muslim community celebrating Id. “They  will be travelling to offer prayers in mosques and visit their relatives’ house on the occasion. We want them to face no difficulty in observing their ritual, so transport services will be on. However, shops and bazaars will remain closed,” a senior Morcha leader said. The Morcha leadership will also conduct no political programme on Monday. They have been conducting rallies in support of their demand of Gorkhaland since the day they called the indefinite bandh in the Hills.

Meanwhile, the student youth held a rally from Baghajatin Park in Siliguri and after traversing parts of Siliguri town, reached Airview More where the police had put up a barricade. When they tried to go beyond it, they faced resistance from the police and had to retreat. They burnt the effigy of Morcha chief Bimal Gurung, shouting slogans against Gorkhaland. They demanded the establishment of peace in the Hills.

While returning, they ransacked around five vehicles that had come from Sikkim at Hill Cart Road. Soon after Sikkim chief minister Pawan Chamling had written to union home minister Rajnath Singh extending support to Gorkhaland, the cars from Siliguri were being stopped from going to Sikkim. The vehicles that were ransacked had come from Sikkim. A driver was injured amidst the chaos.

BJP national general secretary and observer for Bengal, Kailash Vijayvargiya, blamed the Mamata Banerjee government for the turmoil in the Hills.

“The GTA was formed after a tripartite agreement between the state, centre and the Morcha for upholding the culture and tradition of the Hill people. However, Mamata Banerjee has not given administrative and economic freedom to the (GTA) in the Hills. This has resulted in their rage against her. She should come and seek pardon here,” he said.

The Morcha leadership announced that they would hold rallies armed with tubelights on Tuesday, with which they will hit themselves in solidarity to their movement for Gorkhaland.