The West Bengal tourism department has come up with numerous packages for pandal hopping in Kolkata and other places outside Kolkata. 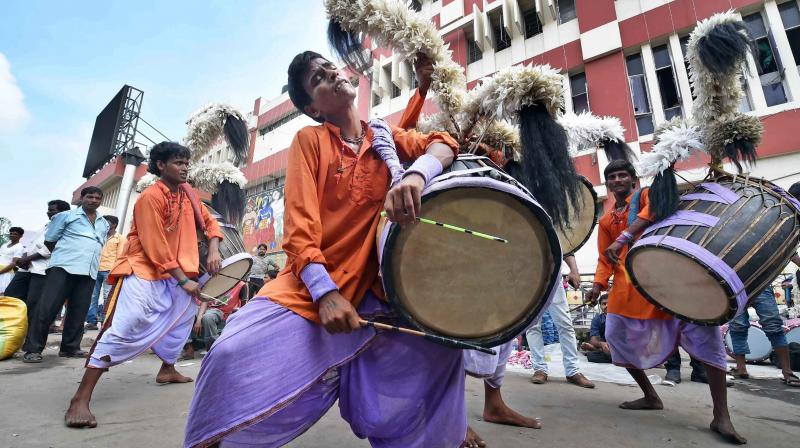 “Dhaakis” perform in front of Sealdah station in Kolkata on Sunday. (Photo: PTI)

Kolkata: The West Bengal tourism department is leaving no stone unturned to cater to the varied liking of foreign and domestic tourists during Durga Puja beginning this week.

The West Bengal tourism department has come up with numerous packages for pandal hopping in Kolkata and other places outside Kolkata.

“We have made efforts to include different flavours of Durga Pujas, the biggest festival of the state, to cater to all kinds of tourists and their varied likings, from the hustle and bustle of the city with its overwhelming lights, colours and large pandals to the serene atmosphere of a village where the pujas are celebrated in a different way,” West Bengal tourism minister Gautam Deb said.

“Several tour packages for all kinds of people have been planned for viewing popular Durga Puja pandals in Kolkata as well as sightseeing in different places of the state,” he said. The Kolkata carnival will also be organised during the pujas, the minister said.

“Apart from these, the FIFA Under-17 World Cup will commence from the first week of October, which will also attract tourists from different parts of the world as also from other parts of the country,” Mr Deb told PTI here. Mr Deb said that the state government is arranging tours for players from different countries so that they can go around and visit some Durga Puja pandals in and around the city.

“Though the situation is still not conducive for tourists to visit Darjeeling and other destinations in the Hills, tourists are flocking to Dooars in the foothills and adjoining plains in North Bengal,” Mr Deb said. I

Other places of tourist interest like Purulia in the rugged and hilly western part, the sea resort town of Digha, and Murshidabad with its rich heritage are also being decked up for travellers.