Metros   Kolkata  25 May 2018  Congress slams Centre on fuel prices, to protest on May 26
Metros, Kolkata

Congress slams Centre on fuel prices, to protest on May 26 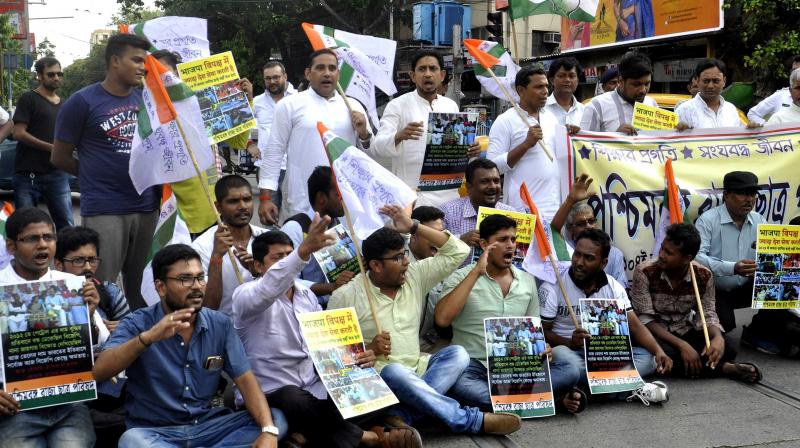 Actvists of the State Chatra Parishad protesting against the rise in petroleum prices at Moulali on Thursday. (Photo: Asian Age)

Kolkata: West Bengal Pradesh Congress Committee president Adhir Chowdhury on Thursday slammed the Centre for the steep hike in fuel prices and said the Congress would observe a day’s protest on the issue on Saturday.

The rising crude prices in the international market have prompted state-owned oil companies to raise domestic prices for 11th day in a row.

Describing the steep hike in petroleum prices as an “anti-people policy of the Centre”, Mr Chowdhury alleged that it was done to suit the interests of the oil companies.

“The West Bengal Congress will observe May 26 as protest day against the fuel price hike,” he said adding the day would also be observed in protest against violence during panchayat polls.

Stating that the prices of diesel and petrol are higher in Bengal compared to states like Delhi and Goa, Mr Chowdhury said the state government should play its role by reducing taxes to give relief to people. States tax the oil on ad valorem basis. On an average, they tax petrol at 27 per cent, according to the country’s premier thinktank Niti Aayog.

“The state cannot evade it’s responsibility. The CM had earlier said on another issue that charity begins at home. Why it then it can’t lower its tax on petrol and diesel to lower the petroleum prices in Kolkata, which is one of the highest in the country,” Mr Chowdhury said.

While the ruling TMC has been protesting against the hike nationally, it was not doing enough to lower the prices in the state by reducing its own share of taxes, he said.

To a question on Mamata Banerjee advocating a federal front of regional parties at the national level without the Congress ahead of the Lok Sabha elections next year, Chowdhury said, “She is talking on an outlandish theme”.