TMC MLA Nayna Bandopadhyay, the wife of the MP of North Kolkata, said that the treatment at the private hospital was expensive. 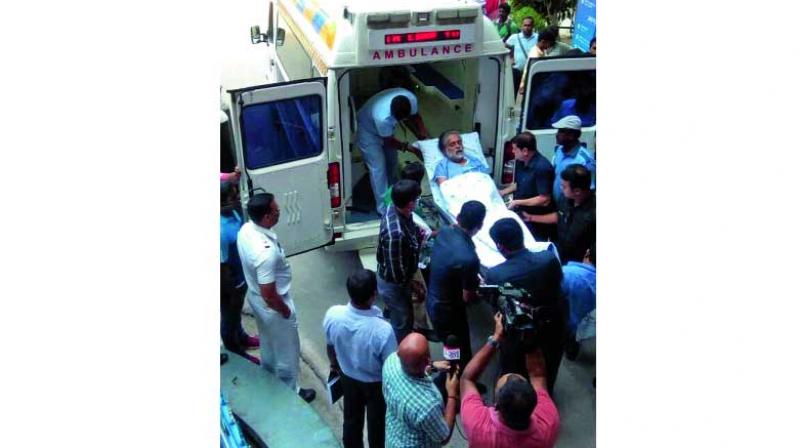 Trinamul Congress MP Sudip Bandopadhay, who is out on bail, being shifted to SSKM Hospital on Wednesday. (Photo: Asian Age)

Kolkata: Trinamul Congress MP Sudip Bandopadhyay, a key accused in the multi-crore Rose Valley chit fund scam, was shifted to government-run SSKM Hospital from Apollo Gleneagles Hospital on Wednesday afternoon. He has been admitted at the Woodburn Block where his condition is under observation of a medical board.

The move comes as the CBI, which arrested him in the case in January this year, prepares to move the Supreme Court to request for the cancellation of his bail granted by the Odisha high court last week.

Trinamul MLA Nayna Bandopadhyay, the wife of the MP of North Kolkata, however, said that the treatment at the private hospital, where he remained admitted for the past couple of days following his arrival from Bhubaneshwar, was expensive. At the government run super-speciality hospital, a three-member medical board has been set up for the treatment of the ailing MP. The doctors on the panel are Rajen Pande, head of the department of nephrology, D.P. Sinha, cardiologist and Soumen Ghosh, medicine specialist.

“Mr Bandyopadhyay’s clinical condition is still a cause of concern. He is being monitored closely and appropriate treatment given,” sources had said on Tuesday.