Earlier Mr Ghosh declared the BJP’s poll battle against the Trinamul in the Panchayat Elections. 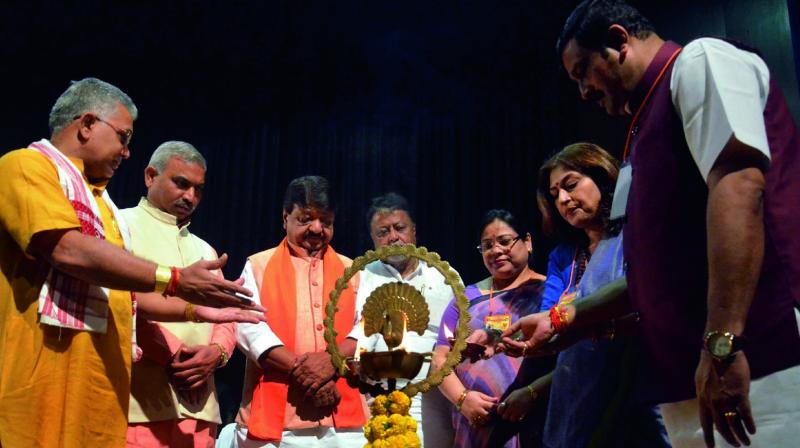 Kolkata: The BJP on Saturday entrusted Mukul Roy for chalking out and leading the party’s battle for the upcoming Panchayat Elections as state BJP president Dilip Ghosh vowed to fight the Trinamul Congress tooth and nail, threatening to take the battle to the crematorium.

At a meeting attended by central BJP leader Kailash Vijayvargiya and state leaders, the decision of giving the task to Mr Roy about the rural poll strategy was taken, according to sources.

After he joined the BJP, Mr Roy was engaged by the party in the two by-polls: Noapara assembly constituency in North 24 Parganas and Uluberia Lok Sabha constituency in Howrah.

His calculation, however, backfired as former Trinamul MLA Manju Basu, roped in by him as a candidate, refused to fight for the BJP in Noapara even after her name was declared by the party’s central leadership. Earlier Mr Ghosh declared the BJP’s poll battle against the Trinamul in the Panchayat Elections.

Addressing a workshop for the party workers, the Kharagpur MLA told them, “We will fight the Panchayat Elections. And we will win it. We have to do it physically and mentally for the clash. You have to keep it mind that we are ready to go from the police station to the court to the crematorium. The battle will conclude at the crematorium. I, Dilip Ghosh, declare it here. Those who have the guts will fight.” His call earned him applause. Mr Ghosh added, “If they (the Trinamul) have thought that the battle would end within the polling booths, it would not happen. We will take the battle to the crematorium. We have joined the BJP with that mentality.”

Bantering him Trinamul secretary general Partha Chatterjee said, “They are trying to create a hype by using words like crematorium. But they do not have that manpower. If there is men then the heat is there. They would not have the heat because they have to neutralise the heat by themselves. In this state BJP is a turned turtle on the table. They are throwing their hands and legs but they can not stand up.”