Bus carrying around 65 tourists including four children and some women from Medinapur of West Bengal came to Dhauli from Puri. 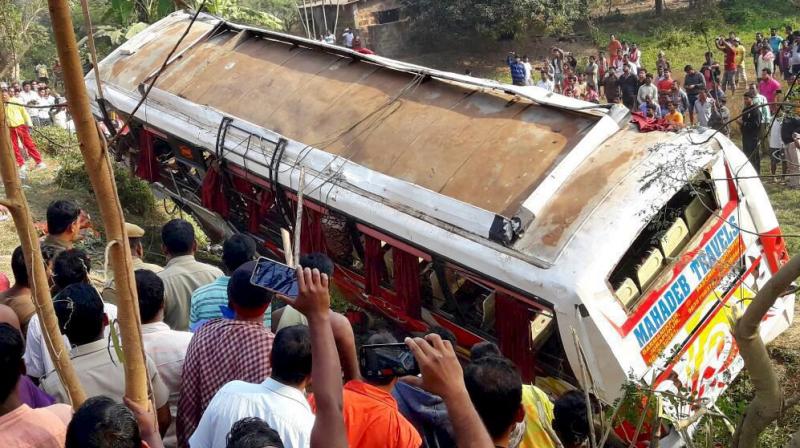 People looking at a tourist bus which met with an accident near a steep curve at Dhauli hill in Bhubaneswar. (Photo: PTI)

Bhubaneswar: At least 36 passengers were Tuesday injured, some of them critically, - after a tourist bus they were travelling in skidded off the road and fell off the Dhauli hill, here on the outskirts of the city. All the injured were rushed to Capital hospital.

“Six of tourists who sustained injuries in head have been shifted to SCB Medical College and Hospital in Cuttack for better treatment. Seven have been admitted here and are under observation. Others were administered primary treatment. Their condition is stable,” state health director Kailash Das said. Those who sustained minor injuries were discharged after primary treatment, he added.

Khurdha collector Niranjan Sahoo rushed to Capital Hospital and enquired about the health condition of the tourist from neighboring state.

The bus carrying around 65 tourists including four children and some women from Medinapur of West Bengal came to Dhauli from Puri. The vehicle lost control while returning from the top of the Dhauli hill due to brake failure and overturned.

Passersby and some other tourists tried to block the road after brake failure, but failed. Fire brigade and police personnel rushed to the spot and rescued the injured by breaking windowpanes with the help of locals.

“Fire control room received a phone call at around 7.45 am about the mishap. The tourists were shifted immediately to the hospital by fire vehicles, PCR van and ambulance vehicles,” assistant fire officer Ramesh Sethy said.