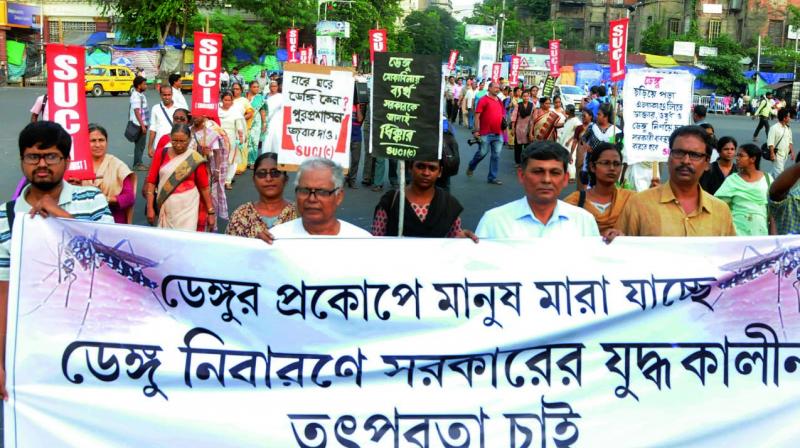 SUCI(C) supporters protest against the state government over the spread of dengue at Rani Rashmoni road in Kolkata on Monday. (Photo: Abhijit Mukherjee)

Kolkata: The BJP’s protest rally complaining of the Mamata Banerjee government’s failure to tackle dengue menace in the state turned violent near Swasthya Bhavan in Salt Lake on Monday.

A group of 500 party workers led by women wing leader Locket Chatterjee took out a rally from Karunamoyee on Monday afternoon.

They marched to the state health department headquarters at GN-29 in Sector-V.

The police had already put barricades to stop the rally ahead of the building. Several BJP workers however broke the police barricades and tried to enter the Swasthya Bhavan forcibly. When the police personnel tried to stop them, the angry BJP activists squatted on the road while shouting slogans.

They also burnt the effigy of the chief minister who is also the health minister.

A fight broke out when the cops tried to remove them. Two among the demonstrators-- Pankaj Singhania and Shankar Adhikary were detained by the police. Ms Chatterjee later alleged, “Dengue is a disease. Now the Trinamul Congress is playing politics over it. Its government is trying to cover it up. It has failed to release a white paper declaring the number of deaths. Tests are not being conducted even.”

She added, “Dengue as the cause of death is not being written by the doctors or the hospitals in the patients' death certificates.” Ms Chatterjee also demanded the chief minister to make the death toll public. “Already the death toll crossed 1000 while around 25000 people have been affected by it but they are not getting proper treatment,” she claimed.

The police tried to stop the BJP workers near Karunamoyee area of Salt lake by putting up barricades on the road but failed.

Some activists of the Bharatiya Janata Party’s Mahila Morcha put up mosquito nets on the streets and registered their protest while sitting inside.

The BJP workers crossed the barricades and tried to enter the Swastha Bhawan with flags and posters but were dispersed by the forces, the police said few BJP activists were detained, the police added.

Accusing chief minister Mamata Banerjee of trying to “mislead” the people and doing politics over a serious issue like dengue outbreak, BJP state Mahila Morcha President Locket Chatterjee said the Trinamul Congress government should immediately ensure proper treatment of the affected and compensation to families of those who succumbed to the disease.