5 killed, over 24 hurt in temple stampede

Mamata announces compensation of Rs 5L for families of victims and Rs 1L for each critially injured. 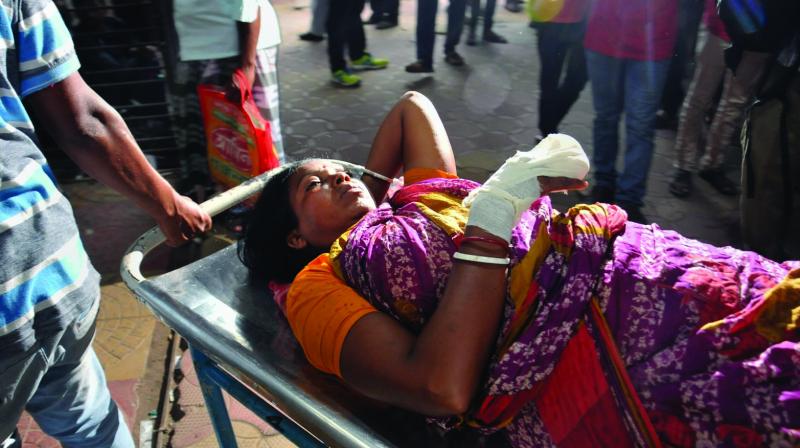 Injured Kaushi Mondal being treated at Calcutta National Medical College & Hospital after a wall collapse in Kachua triggered a stampede like situation in North 24 Parganas district on Friday. (Photo: PTI)

Kolkata: At least five devotees were killed and more than two dozens were injured in a stampede after a wall-collapse during Janmashtami celebration at an old temple in Basirhat of North 24 Parganas in the wee hours of Friday.

The death toll is feared to rise. Chief minister Mamata Banerjee announced a compensation of Rs 5 lakh for families of the victims and Rs 1 lakh for each critially injured during her visit to Calcutta National Medical College and Hospital (CNMCH) and SSKM Hospital.

Lakhs of devotees visit at Baba Loknath Temple at Kachua in Basirhat every year on the occasion of Janmashtami. This year was no exception. On Thursday night sea of devotees crowded the temply to offer puja. After 2 am on Friday a heavy shower got underway. Those, waiting in serpentine queues outside, tried to enter the temple hurriedly to save themselves from the rain. The temple turned overcrowded soon. The wall of the entrance also became weak due to the rain.

Unable to bear the pressure of the devotees, the wall collapsed falling on temporary shops made of bamboo structure which have mushroomed around the temple over the years. Panicked, the devotees tried to flee, according to the preliminary investigation.

Several of them however fell on the ground due to the rain leading to the stampede and leaving them injured critically. The district administration had launched rescue operations.

Out of them, five including three women died.

The victims were Aparna Sarkar, Tarun Mondal, Purnima Gorai, Sonaika Das and a man whose identity is yet to be established. Sarkar and Mondal, both of Basirhat, were declared dead at the CNMCH.

Gorai of Rajarhat was declared dead at the RGKMCH. Das, also from Basirhat, was declared brought dead at SSKM. The fifth victim was brought dead at CMCH. The CM said, “Nothing can be done after death. But those who are left have a family. Lot of women visited the temple. I am feeling sad.”

“Our government will provide a compensation of Rs 5 lakh for each victim’s family and Rs 1 lakh for each seriously injured. Those with minor injuries will be offered Rs 50,000,” she added.

The chief minister further said, “We actually take care of Loknath Baba Temple in Chakla. But the temple at Kachua also witness heavy crowd. We take action there too. But this time the crowd was too heavy.”

“The accident had happened during the rain. Some shopkeepers occupy the space near the entrance installing bamboo structure. Some people tried to take shelter there. Others fell in the pond in a hurry.”