Later another round of search operation the bodies of Naskar and Manik were recovered. 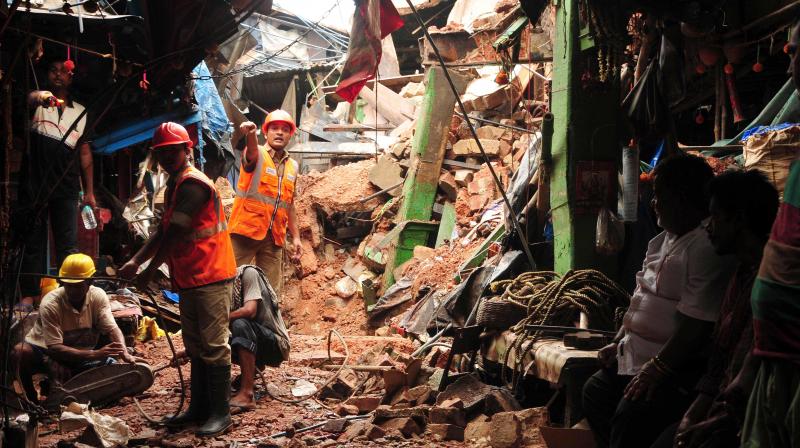 People stand near the debris after a portion of a dilapidated two-storeyed building collapsed in Sealdah area following monsoon rains, in Kolkata on Monday. At least two people died in the accident. (Photo: Abhijit Mukherjee)

Kolkata: Two men died while two others were injured after a portion of an old two-storeyed building collapsed in Sealdah during rain in the wee hours of Monday. The victims were Gopal Chandra Naskar (62) and Manik Jana (48). They were sleeping alongwith others at the ground floor of the house on 15/16 Baithakkhana Road in ward no 49 of the Kolkata Municipal Corporation near Muri Patti.

At around 2 am a portion of the first floor, spread across 400 sq ft, of the house got dislodged with a defeaning sound, according to the police. Local residents informed the Muchipara police station. Naskar and Manik fell trapped under the debris alongwith others. Preliminary investigation suggested that incessant rain had made the building weak.

Later the disaster management group and fire brigade personnel rescued two men: Ratan Chowdhury (48) of Bechulal Road in Entally and Binod Shaw (50), a resident of the same building, from under the debris. The two injured were rushed to Nil Ratan Sircar Medical College and Hospital (NRSMCH) from where they were released after first-aid later.

Later another round of search operation the bodies of Naskar and Manik were recovered. They were declared brought dead at NRSMCH however.

The two bodies were sent for post-mortem. Naskar was from Nimpith at Joynagar in South 24 Parganas while Jana was from Satpota at Daspur in West Midnapore.

A case on negligence charge was initiated by the police.