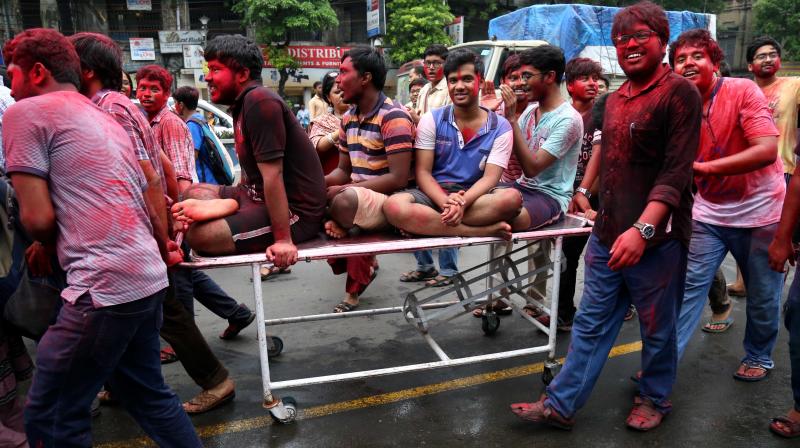 Calcutta Medical College and Hospital students take out a rally after the authority agreed with their hostel demands on Monday. ( Asian Age)

Kolkata: Chief minister Mamata Banerjee has removed IAS officer Anil Verma from the state health secretary’s post and shunted two other senior health officials hours after the group of MBBS students at Calcutta Medical College and Hospital (CMCH) ended their two-week-long fast unto death agitation on Monday as the CMCH authorities buckled under pressure of their protest and accepted their demand of allotment of accommodation at the students’ hostel.

According to sources, Ms Banerjee, also the health minister, was dissatisfied with Mr Verma’s role in tackling the students’ demonstration. Mr Verma who was earlier recalled from the Indian High Commission in London in 2011 for wife-beating charges during his diplomatic posting there has been transferred to the animal husbandry department as its secretary. IAS officer Rajiva Sinha who was the micro and small scale enterprises department’s secretary has been appointed as the new health secretary.

Meanwhile, Dr Debasis Bhattacharya was removed from the post of director (medical education) of the department. So was the fate of Dr Ashoke Bhadra who was made principal of the CMCH who made the breakthrough within two days of his posting which was temporary.

Dr Bhadra earlier replaced Dr Ramanuj Singha, the successor of Dr Uchchhal Bhadra who was relieved of his charge as he fell reportedly ill during the agitation.

Ignoring the protests Dr Uchchhal Bhadra earlier affirmed that the senior MBBS students could not be accommodated at the hostel alongwith their juniors according to the guidelines of the Medical Council of India. In a dramatic move he was however reinstated in the same position after the stalemate ended in the afternoon. The reason behind his return and Dr Ashoke Bhadra’s removal was wrapped in mystery.

Before his removal Dr Ashoke Bhadra said, “It was decided at the college council meeting that two floors in the new hostel building have been allotted for the second, third and fourth year students’ accommodation. Same has been done for the first year students. Two more floors have been earmaked for the post graduate students. A written notification would be issued soon.”

The agitating students withdrew their fast after the notification was issued. Claiming success they took out a victory rally on the campus.