Trekkers who go for adventures at Sandakphu in large numbers during the Pujas have also cancelled bookings of their huts. 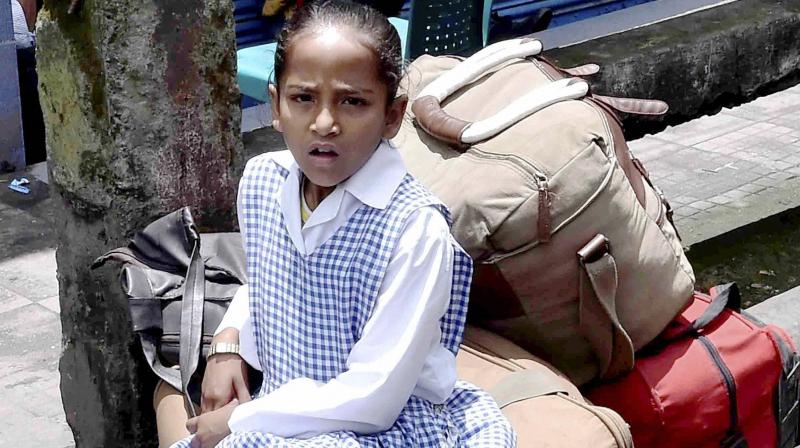 A school student waits for transport during GJM's indefinite bandh in Darjeeling on Friday. (Photo: PTI)

Kolkata: Darjeeling’s loss is a gain not only for Doars but also for north-eastern states like Assam, Meghalaya, and even the neighbouring state of Tripura.

Travel agents across Bengal have been noticing the trend of tourists shifting to these places since the unrest in Darjeeling, Kurseong and Kalimpong from June 8 after chief minister Mamata Banerjee chaired the Cabinet meeting in the Hills on June 8.

“40 per cent of our puja bookings were complete before the violence commenced. Now we are flooded with calls for cancellation of tours in the Hills and requests for making alternative arrangements in Doars. There are also pleas of extending the train reservation upto Guwahati. Train tickets for Guwahati have also been sold out. So we are requesting our clients to take the bus route from New Jalpaiguri to Guwahati. Those who can afford a bit more are also willing to travel to Tripura, “ joint secratary of Travel Agents Association of Bengal (TAAB), Nilanjan Basu said.

He added that some tourists who can afford to add to their list of holidays as well as budget are also requesting to change their tour plan to the western states like Gujarat and Rajasthan. Eighty per cent of the hotels and homestays that were booked in Darjeeling, Kurseong and Kalimpong have already been cancelled. “Places like Pedong. Icchegaon, Charkhol, Ramdhura in Kalimpong and Takda, Latpanchar, Lamahata, Lepchajagat and Mirik in Darjeeling where home stays are mostly the staying options for tourists have witnessed a host of cancellations in the last few days,” another official of TAAB said.

Trekkers who go for adventures at Sandakphu in large numbers during the Pujas have also cancelled bookings of their huts.

“Of course there are a only a handful of tourists who are keeping their fingers crossed and hoping to visit Darjeeling as it’s still more than three months to go for the Pujas,” the official said.