All 43 GJM members resign from GTA

Gurung: GJM will burn copies of GTA agreement in protest on June 27. 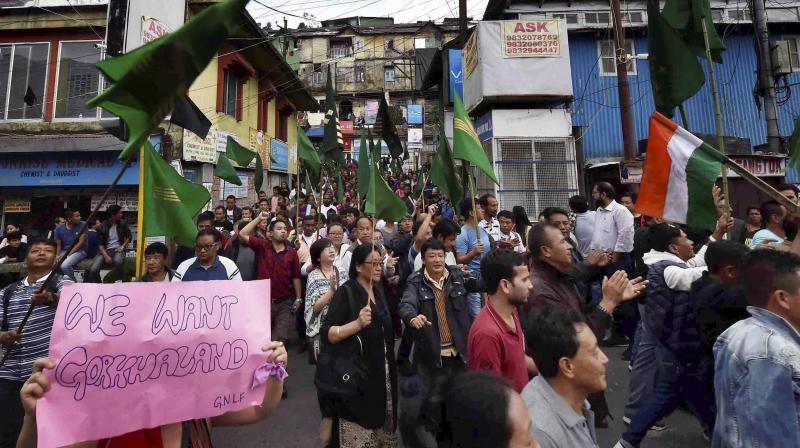 Supporters of GNLF participate in a rally to demand for separate state of “Gorkhaland”, in Darjeeling on Friday. (Photo: PTI)

Kolkata: Going on warpath with the Mamata Banerjee government, 43 Gorkha Janmkuti Morcha (GJM) leaders, including their chief Bimal Gurung, resigned from the Gorkhaland Territorial Administration (GTA) on Friday as the strike called by the GJM entered its twelfth day in Darjeeling amidst deployment of army, central reserve police force and state police troops.

On Saturday, they will submit their resignation letters to GTA principal secretary Barun Roy, who will forward them to the state government. The GTA agreement is a tripartite accord which was signed at Pintail village between the GJM, the West Bengal government and the Centre in the presence of chief minister Mamata Banerjee and the then Union home minister P.Chidambaram on July 18, 2011 after the Trinamul Congress came to power.

The accord paved way for the formation of GTA, an autonomous body in the hills with administrative and financial powers for development in Darjeeling. Mr Gurung was appointed the chief executive of the body, while GJM general secretary Roshan Giri was in the list of the executive members including Mr Gurung’s wife Asha Gurung.

Elusive for the past seven days, the GJM chief, who has been booked in a murder case by the police for  killing three GJM activists in a recent clash, announced the resignation of 43 GJM members at a press meet at Patlebas during the day. “All the 43 GJM members in the GTA resigned following our alliance partners’ appeal to us to pull out of it for the sake of Gorkhaland,” Mr Gurung said.

“We have rejected the GTA. From today we, as ordinary people, will move ahead and will fight for Gorkhaland. To mark our pull-out, we will burn the copies of the GTA agreement during our protest on June 27. On June 29, an all-party meeting will be held in Darjeeling. I appeal all the hill parties, who have supported us, to attend the meeting to jointly decide future course of our movement,” he added.

Mr Gurung also said, “There is only one point agenda: Gorkhaland. We have no other demand. We have just resigned from the GTA. The question of any election does not arise. We would not let that happen. Today a relief was given for the students only. But no more relaxation will be given come what may. I don’t care even if I lose my life. We are democratic. Since 2007, we have been fighting this democratic movement.”

He claimed, “Stones were pelted and sticks were used. But we never opened fire. It was the police which shot dead three GJM supporters. We want the district magistrate and superintendent of police of Darjeeling and West Bengal government to own the responsibility for it.”