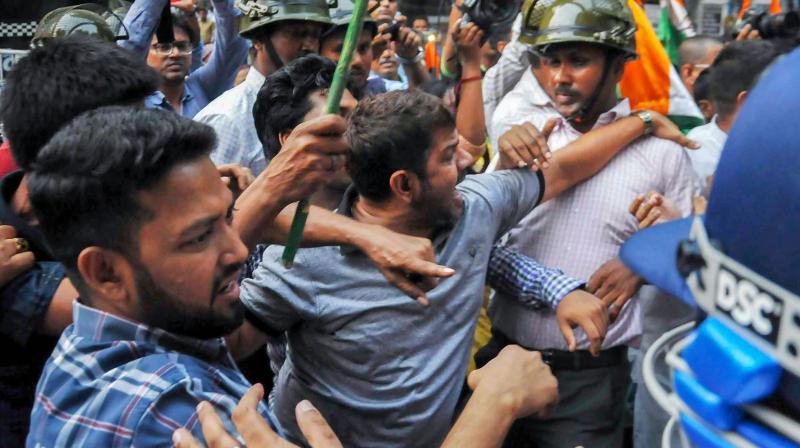 Berhampore/Kolkata: It is not only the Opposition parties’ panchayat election candidates and foot soldiers who came under violent attacks by the ruling party’s activists on Monday.

Even the Opposition MLAs and MPs were not spared when they led their party candidates to file their nominations.

At around 1.30 pm Mr Chakraborty, also the chief whip of the Congress Legislature Party, was leading a group of Congress candidates to file their nominations at the block development officer’s (BDO) office in Berhampore. Suddenly a group of Trinamul workers armed with rods and bamboo poles blocked their way and started thrashing them.

Lashing out at the ruling party state Congress president Adhir Chowdhury said, “Mr Chakraborty has been ill already. Still he was not spared. Our apprehension of violence by the Trinamool came true again.”

At Shamshergunge, bombs were hurled at Mr Khan Chowdhury’s car which had reached a district Congress party office. Although the Congress MP of Malda South escaped unhurt, his car driver and personal secretary were injured. His car was damaged also. The two injured were admitted to Murshidabad Medical College and Hospital.

Mr Khan Chowdhury who came to supervise the Congress candidates’ filing of nominations claimed, “The bombs were hurled by the Trinamul workers in presence of the police. How can one submit nominations in such a situation? Why would such incidents happen?”

Another group of Trinamul workers hurled bombs at Mr Mukherjee on his way to Nabagram BDO office with the Congress candidates in the morning.

The Jangipur MP escaped unhurt luckily. At Laudoha Mr Supriyo was given ‘Go Back’ slogans by the Trinamul workers before he was stopped by the police from entering the sub division office at Faridpur where the BJP led some party candidates to file their nominations.

He told the Trinamul workers, “You go back. Let our candidates file their nominations. Your shouting would not help because it has been recorded.”