The slueths have interrogated some of the victim’s friends and locals for further leads. 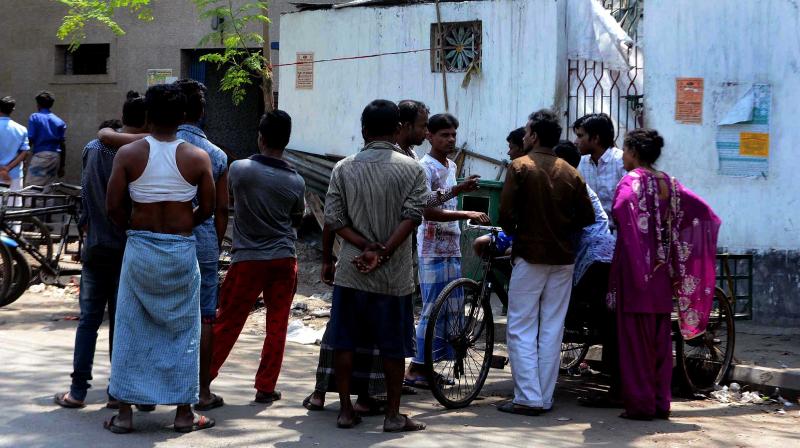 Locals at the crime scene in Tangra on Thursday. (Photo: Asian Age)

Kolkata: Tension gripped Tangra area in the eastern part of the city on Thursday morning after a youth was shot at by some miscreants on DC Dey Road.

The victim, Md. Juman was admitted at NRS Hospital. According to police sources, the youth was sitting by a roadside when the two accused, Ayub and Bablu, came on a motorcycle.

An altercation ensued between the victim and the accused after Juman protested against the duo who were allegedly trying to create disturbance in the locality by indulging in “anti-social activities”. One of them took out a gun and shot at him.  They fired four rounds of bullet, and one of them pierced his leg.

Some of Juman’s known neighbours, who were at the spot, rushed him to NRS Hospital. The miscreants, however, fled the spot immediately after the incident.

Police sources said the two accused have been involved in various anti-social activities in the locality in the past. They used to sell illicit liquor and narcotics to the local youths. The cops are not ruling out the possibility of an old rivalry between the accused and the victim.

Meanwhile, the investigating officer also started a probe to ascertain if it was a fight over who would take control over the area. The slueths have interrogated some of the victim’s friends and locals for further leads.