Metros   Kolkata  23 May 2018  ‘Awareness on coastal security must’
Metros, Kolkata

‘Awareness on coastal security must’

Like in south Goa, Mangalore, Kannanore, awareness is much more there compared to many places in between them. 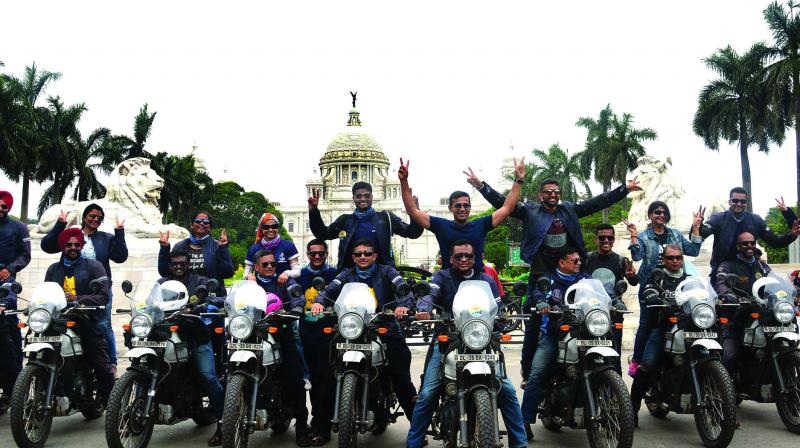 To mark the golden jubilee of the Western Naval Command, 20 Naval bikers travel from Jamnagar to Kolkata covering 7,000 km in 21 days, in a photo shoot in front of Victoriia Memorial in Kolkata on Tuesday. (Photo: Abhijit Mukherjee)

Kolkata: A senior Indian Navy officer on Tuesday stressed on the need for more efforts to increase awareness about coastal security in the country.

Speaking to this newspaper, Flag Officer Commanding Goa area Rear Admiral Philipose G. Pynumootil pointed out that people living near the naval and coast guards establishments, are more aware than those from other places.

He said, “There are lot more scopes to create awareness about coastal security. What we found was that there is a basic interest about it among the people near the naval area. Since I am heading the Goa Area, we go in our boats and aircraft to interact with the local people in the villages on a monthly basis.”

Rear Admiral Pynumootil, who is also the Flag Officer Naval Aviation, explained, “We find people in those villages which are located close to the Navy and Coast Guard units, are conscious about the coastal security. But the other parts are not as good as them. I can not say specifically which those areas are. Like in south Goa, Mangalore, Kannanore, awareness is much more there compared to many places in between them.” He led the last leg of the 22-day-long West-to-East coast Lighthouse motorcycle expedition — on the occasion of the Western Naval Command’s Golden Jubilee celebrations – flagged in by Naval Officer-in-Charge (West Bengal) Commodore Suprobho K. De at INS Netaji Subhas in Hastings. The expedition team members also interacted with the fishermen en route to spread coast security awareness.

On the frequent complaint against the Indian fishermen of not following security steps in the sea, Rear Admiral Pynumootil added, “We did not find any negative response. If we continue to reach out like this, we can then sort out the issue. There are around 160 radar stations along the coastline. Each is manned by three to four personnel. But people are also aware of the radars. The good sign is that people want to cooperate.”