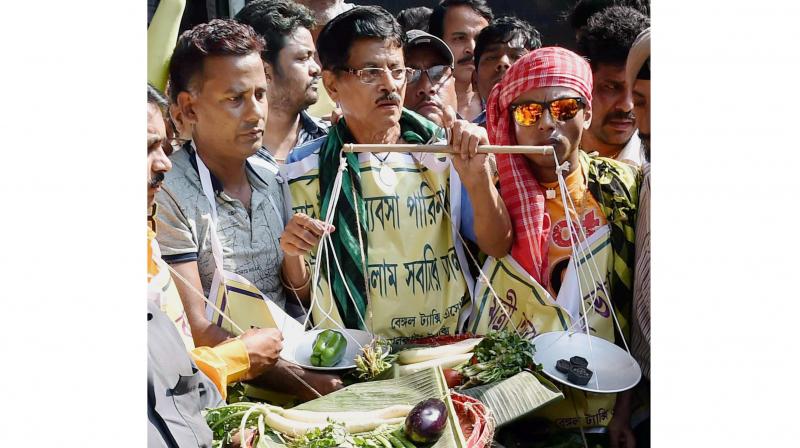 Kolkata: The bus, minibus and the taxi associations in the state, that have been vocal for the last few months with the common demand of increasing fares, had planned to submit a joint deputation to the principal secretary transport on Tuesday. However, the Bengal Taxi Association (BTA) decided to have a unique way of pressing for their demands by posing as vegetable sellers.

Members of Joint Council of Bus Syndicate (JCBS) were offended with the way the taxi association placed their demands and left from the gate of the transport department’s office on R.N. Mukherjee Road.

“We along with the minibus association will separately press for our demand of fare hike. The Centre has introduced a lot of taxes in the transport sector and the price of petrol too have shot up by Rs 11 within a short span of time. I have spoken to transport minister Suvendu Adhikari in January and he assured us to examine our demands,” general secretary JCBS Tapan Mukherjee said.

The last time bus fare was increased in the state was in September 2014 following which chief minister Mamata Banerjee had formed a task force to look into the demands of the private transport operators. In the last one year the number of taxis have come down to 19,000 from 37,000. “We are not able to pay our drivers as we are paying so much on taxes. We have been pleading for increase of fares but to no avail. We posed as vegetable sellers as this is the ground situation for the cabs as so many drivers have left this vocation,” a member of BTA said.