Row over SRFTI girls’ hostel refuses to die down 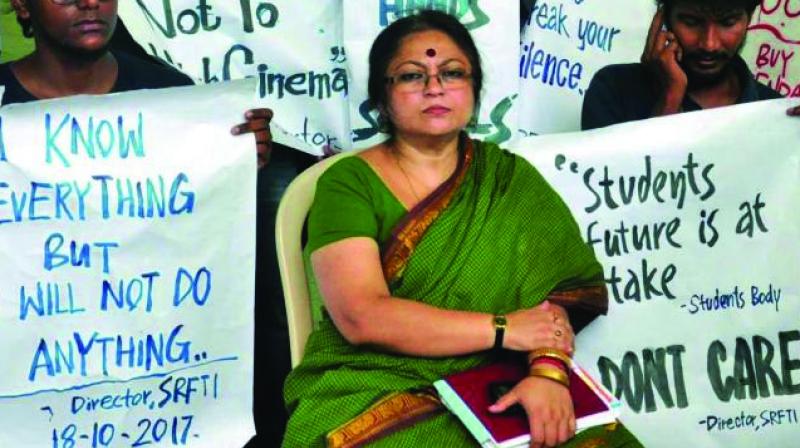 Kolkata: The stalemate over shifting of girl students to a new hostel in Satyajit Ray Film and Television Institute (SRFTI) continues even as the institute management on Friday held talks with  the students’ body to resolve the issue.

SRFTI Director Debamitra Mitra said, “The faculty including me  is now holding talks with the students. We want normalcy to return.  But we wont withdraw the decision to shift girl students to a new hostel or the decision to expel 14 girls for refusing to shift to the new hostel.”

“We are ready to discuss other issues including improving their facilities and facilitate funds for film projects. We are not anti-students,” Ms Mitra said in course of discussions with the faculty and students’  representatives. Students’ Body spokesman Akshay Gouti said “We are still hopeful about a breakthrough.

But the two core issues of taking back the expulsion order of our 14 girls should be withdrawn and the decision to shift the girls.”

Akshay said the protests by students will take place till the two decisions are withdrawn along with talks. “Talks will continue for some more time. Let’s hope the management will appreciate our views.

One of the 14 expelled students Ruplatha Purakayastha said, “talks are on. But we are united.” The expulsion of 14 girl students from the SRFTI for their refusal to vacate an old hostel and shift to a new accommodation triggered protests on the premier institute’s campus on October 17.

The students alleged that building a separate accommodation for girls was an act of moral policing. Denying the allegations, the SRFTI director had said the authorities had taken this decision to build a separate ladies hostel, upgrade curriculum and infrastructure at the institute after receiving an approval from the Union Information & Broadcasting Ministry in 2013.

“Earlier, the boys and the girls had separate accommodation in the same block of an old hostel building. After receiving the I&B ministry’s approval in 2013, we undertook construction of a new building.”