Bantering her and Mr Chatterjee, Mr Ghosh compared their pair with Daal-Bhaat (rice and daal), a popular combination of Bengali dish. 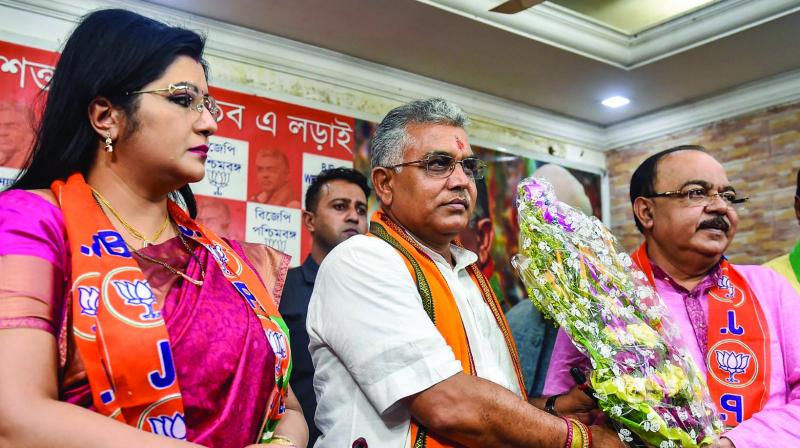 Kolkata: Controversy marked the state BJP’s felicitation ceremony of Behala East MLA Sovan Chatterjee and his close friend Baishakhi Banerjee, who joined the saffron camp in New Delhi recently, on Tuesday. Both took a potshot at state BJP president Dilip Ghosh over his “Daal-Bhaat” joke about them. The state BJP initially planned to welcome the former Trinamul Congress minister only at its state headquarters.

This left Ms Banerjee furious. Voicing her displeasure over the absence of her name at the event, she alleged, “Honour comes first irrespective of the party. No one goes hankering after a post in a party. I have taken a note of the insult on me. I am sure I am not honoured. When the central leadership welcomed us but the state leadership does not follow that, it means I have no place of dignity”"

She claimed, “To me, Sovanda's felicitation is however above everything. Perhaps I did not look worthy of felicitation to them. Someone in the state BJP does not look at it well. I do not think anyone can work in such a situation. Moving ahead in future will be difficult in that case.” Her outburst prompted the state BJP to include her name for her presence at the event.

Ms Banerjee said, “Since I have been invited now, I would attend. But I would see if I still would have the wish to continue." Bantering her and Mr Chatterjee, Mr Ghosh compared their pair with Daal-Bhaat (rice and daal), a popular combination of Bengali dish.

“It was me who asked them to come to felicitate them. Everyone's name is not mentioned always. Sovanda is the main person because he was the mayor who is also an MLA. That is why his name was mentioned only. But her name should have been there also. We know that Sovanda-Baishakhidi are like Bhaat-Daal. So what is the need to call them separately?” he joked.

Mr Chatterjee and Ms Banerjee shot back to Mr Ghosh in his presence at the event. Mr Chatterjee observed, “What did Dilipda mean in ‘Daal-Bhaat’ context? But it is true Baishakhi and me are certainly alternative to each other. Dilipda is present here. Fellow-feeling and teamwork are rare in politics nowadays. Baishakhi and me discussed everything together whenever and wherever called.”

He added, “So the idea is common. But Ms Banerjee as a professor and me as a politician are separate identities.” Ms Banerjee said, “I did not understand who he called Daal and who he meant Bhaat. If Sovanda is Bhaat with whom I mix as Daal, it would be wrong to think because I have an identity and familiarity in my world. If he is meant Daal, I would say I do not have so much weight as Bhaat to carry him away.”