GJM chief is booked after grenade hit on Darjeeling cops

The incident happened around 24 hours after a powerful IED blast at the super market in the Hills. 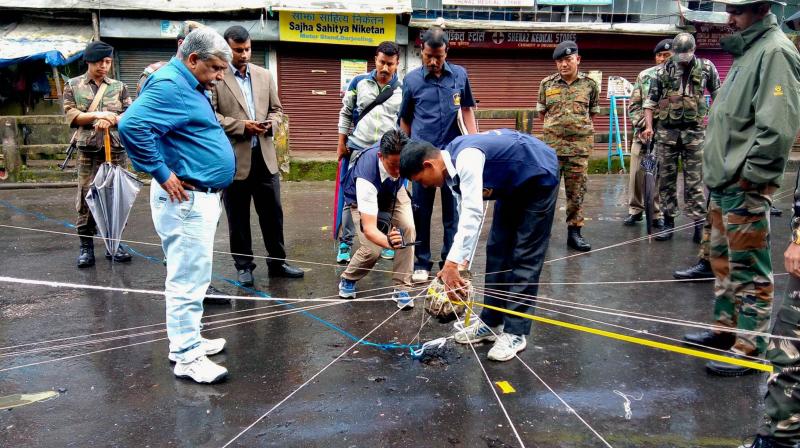 Officials investigate the blast site after an explosion near a motor-stand in Darjeeling. (Photo: PTI)

Kolkata: In what appears to be the rise of militancy in Darjeeling, a grenade attack on Kalimpong police station killed a civic police volunteer and left two cops injured on Saturday night. The incident happened around 24 hours after a powerful IED blast at the super market in the Hills. The guerrilla-style brazen attack, amidst an ongoing shutdown called by the Gorkha Janmukti Morcha (GJM) demanding Gorkhaland, has sent alarm bells ringing to the police establishment as the nature of the attack is rare in the state.

The police has initiated a case and booked GJM president Bimal Gurung and four others on various charges of the Unlawful Activities (Prevention) Act in the deadly attack, said additional director general of police (law and order) Anuj Sharma on Sunday. Besides, several charges of the Indian Penal Code, including sedition and murder, have been slapped on the five accused.

This is the second time Mr Gurung is booked under the law in a day. He was earlier booked under the UAPA in the IED blast at the super market at 10pm. Three bike-borne men, allegedly GJM activists, threw a hand grenade at the entrance of the Kalimpong police station, which now falls under the newly created Kalimpong district.

Civic police volunteer Rakesh Raut (31) and homeguard of the West Bengal police Dendup Sherpa were on duty at the police station with a Shashastra Seema Bal jawan, Manoj Deka.

Mr Raut was killed as the grenade exploded. Mr Sherpa and Mr Deka were injured. The magnitude of the attack rattled the police personnel. Mr Sherpa was rushed to a private nursing home in Siliguri, sais sources, adding that Mr Deka was taken to the Army Hospital in Kalimpong.

IGP (Darjeeling Range) Manoj Verma said, “The grenade was hurled by some unidentified miscreants. A civic police volunteer was killed on the spot while a homeguard suffered deep injuries.”

Preliminary investigations suggested the grenade was fitted with a timer device of seven seconds. Later, superintendent of police (Kalimpong) Ajeet Singh Yadav said, “Recently, an intelligence input about the GJM workers storing explosives came to us after gelatine sticks were stolen from Pulbazar. An IED blast took place at the super market on Saturday, and now a grenade attack at the Kalimpong police station. These incidents indicate the GJM workers may be involved in it. They are waging war against the state by indulging in seditious activities.”

This was not the first time when the same police station witnessed such violence. On July 27, 1986, a GNLF activist brandishing a ‘Khukri’ stormed the police station and tried to attack a senior police officer. A police constable, Subrata Samanta, was stabbed to death. Violence, however, continued soon after the grenade attack. Kalimpong forest bungalow and a guesthouse were set on fire allegedly by GJM activists.