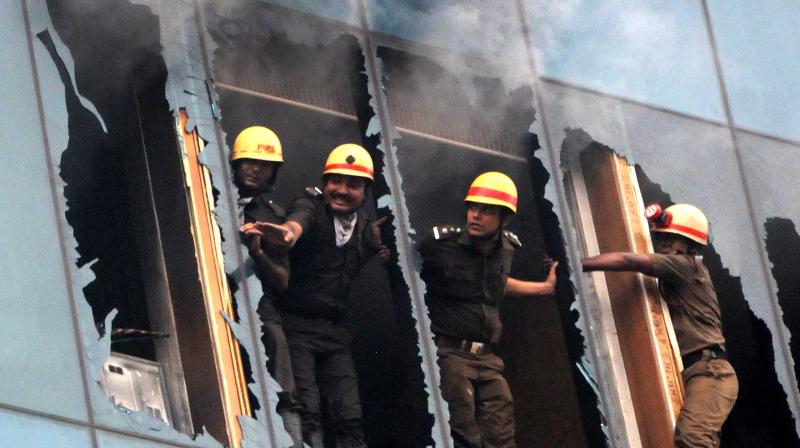 Fire brigade personnel try to control the blaze at a Pretoria Street office in Kolkata on Thursday. (Photo: Abhijit Mukherjee)

Kolkata: A major fire broke out on the third floor of a multi-storeyed building that houses as many as a dozen offices at Pretoria Street in south Kolkata on Thursday afternoon. No casualty was reported. Firemen rescued as many as 12 people who were trapped in the fourth and fifth floors of the building situated just beside the Abhinav Bharati School.

The fire broke out at around 12.50 pm, with a thick column of smoke billowing out of the third floor of the building. The fire alarm was raised by the security staff and the people who were in the first second and third floors managed to make their way out through the staircase. However, people in the fourth and fifth floors were trapped and could not come down due to heavy smoke.

The fire brigade was informed, who immediately reached the spot and managed to bring a dozen people who were trapped with ladders. Eight of them had problem breathing after inhaling the smoke and were rushed to SSKM hospital.

Arun Agarwal, who works at a tea company on the 5th floor, was one of the persons rescued. “We were struggling for breath as there was no window system on the top floors. I broke open the glass and anxiously waited for the firemen. All of us had a lucky escape as the police and the firemen arrived in quick time,” Mr Agarwal said.

The Abhinav Bharati school situated just beside the affected building declared a holiday as a precautionary measure. Sharmistha Sarkar, a commerce teacher in the school said, “As soon as we smelt something burning and the sound of glass breaking, we made announcements throughout the school, telling students to assemble at the ground floor.” All the students came downstairs and were taken to the opposite side of the school building that houses a residential-cum-commercial building.

Guardians were called up to take their wards home,” Ms Sarkar said. Mayor and state fire minister Sovan Chatterjee who visited the spot said that the fire originated from the office of Gas Authority of India (GAIL) Ltd at the third floor. “There was no window system in the building, so there was heavy smoke. We rescued all those who were trapped but some of them had inhaled the smoke and fallen sick. They were taken to SSKM hospital and all of them are stable,” he said. He added that an enquiry would be held to ascertain the cause of the fire.