Meanwhile the state BJP has decided to felicitate its winning candidates in zilla parishads of the panchayat polls at the state level. 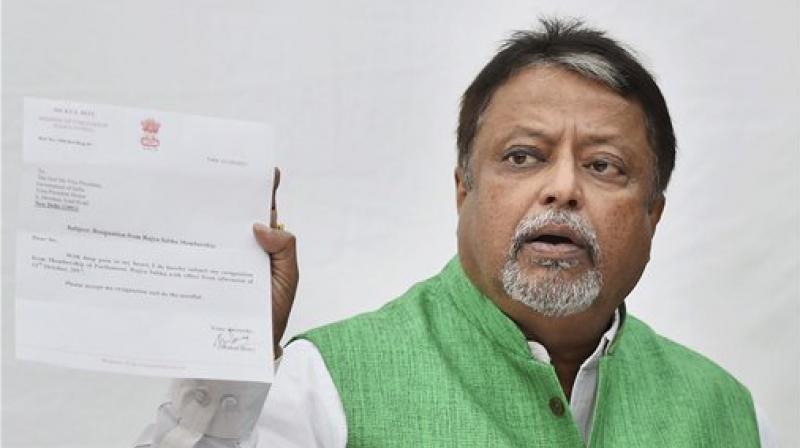 Kolkata: Accusing chief minister Mamata Banerjee of not following democracy state BJP leader Mukul Roy claimed on Sunday that only anti-democratic activities excites the Trinamul Congress supremo. He alleged that those who are involved with such activities get encouragement from her. According to him, the massive violence in the panchayat elections reflected Ms Banerjee’s mood.

Lashing out at the Trinamul chief, Mr Roy who was tasked by the BJP to supervise the party’s poll-preparations, complained, “Ms Banerjee does not abide by democracy. We have seen this in the recently concluded panchayat polls. That is why she becomes excited when anti-democractic activities take place. She praises those who indulge in such activities.”

He argued that around five crores people voted during the assembly elections in Karnataka, which, however did not witness any bloodshed. But when the rural polls were held in West Bengal, the BJP leader reasoned that nearly 30 people were killed during the polling while three more died during the counting.

On the BJP’s poll performance he said, “It was very good. In North Bengal we have won gram panchayats and panchayat samities. But after that counting was not held. Our agencts were thrown out of the counting table as the night progressed. At Balurghat, an MP and a superintendent of police (SP) looted votes even during counting. It is nothing new. You have seen it.”

Mr Roy alleged, “Votes were looted during counting was looted in Nadia, West Midnapore, East Midnapore and North 24 Parganas. Losing hopes the Trinamul desperately resorted to looting votes during the counting process after finding the trend in the panchayat polls that the situation was yet to be in their favour despite rigging during the polling.”

Meanwhile the state BJP has decided to felicitate its winning candidates in zilla parishads of the panchayat polls at the state level. Late it would congratulate the winning candidates at the gram panchayats and panachyat samities at the district levels. The BJP is also preparing to foil any defection which happened earlier.

State BJP-president Dilip Ghosh said, “Our winning candidates have started facing threats from the Trinamul workers. They are facing pressure also. We submitted such complaints to the SPs. But the police is taking no action. In such a situation to boost the morale of the winning candidates we are going to arrange felicitation programme for them at the district and state levels.”