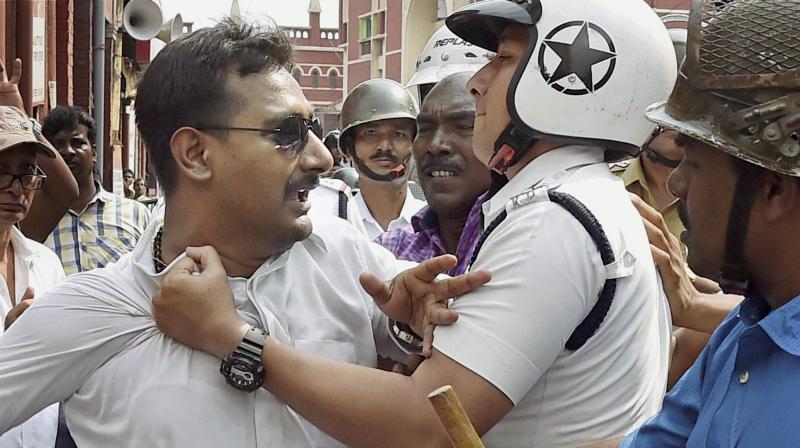 Police personnel detain Youth Congress activists in Kolkata on Thursday during a protest against the state government and Trinamul Congress leaders for their involvement in Narada scam. (Photo: PTI)

Kolkata: Left and Congress councillors boycotted the monthly session of Kolkata Municipal Corporation (KMC) on Thursday and demanded the resignation of mayor Sovan Chatterjee and deputy mayor Iqbal Ahmed whose names figured in the FIR list made by the Central Bureau of Investigation (CBI) in relation to the Narada video footage.

The Left and Congress councillors protested in the well and then staged a walkout carrying placards and shouting slogans in front of the mayor’s room demanding his resignation.

The budget session of the KMC exactly a month ago had witnessed similar agitation by the Left and Congress after the court declared that the Narada footage was genuine. 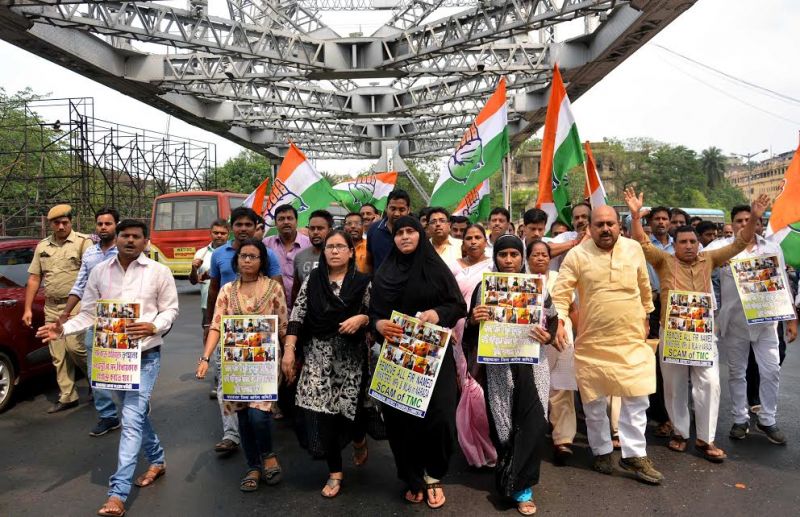 CPI(M) councillor Ratna Roy Majumder said, “Both the mayor and the deputy mayor should resign as their names have figured in the FIR. Their involvement is being probed so how can they continue to hold the chair? Great personalities like Netaji Subhas Chandra Bose and Chittaranjan Das have sat on the mayor’s chair.”

Congress councillor Prakash Upadhyay also condemned it. BJP councillors led by Meena Devi Purohit staged a protest and boycotted the session following the Left and Congress. “When we protested, some of the Trinamul Congress councillors misbehaved with us,” Ms Purohit said. The house session was however not adjourned after the Opposition’s walkout. The Youth Congress also raised slogans outside the KMC demanding the duo’s resignations.