Taking a dig at PM Modi’s recent self-description as a “ faqir” she said it was the people who have become faqirs. 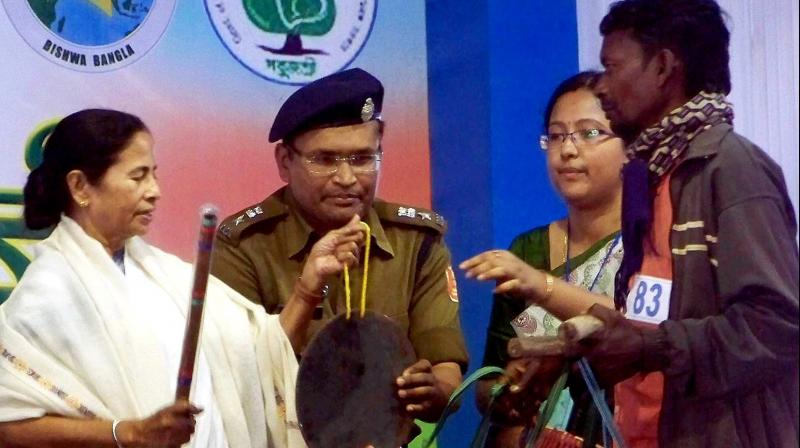 CM Mamata Banerjee during the inauguration of ‘Sabujshree’ programme in Bankura on Monday. (Photo: PTI)

Kolkata: Chief minister Mamata Banerjee on Monday said the Modi government did not understand the hardship faced by the people who were turned into "fakir" after demonetisation. She said that every person in the country except the prime minister has realised that demonetisation has caused enormous hardships to the common people and triggered a major crisis.

“By the time the prime minister realises this, the country would have been ruined,” she claimed while addressing a public rally at Fulkusma in Bankura district.

Terming the Modi government as “deaf and blind”, Ms Banerjee said the Centre seems to be “totally oblivious” to the sufferings of the people.

“Today, the markets are empty; the farmers and workers are in distress. People do not have cash to buy essential commodities. The businessmen are suffering huge losses. The labourers engaged in 100 days’ work schemes are not getting their wages,” she said.

Citing the example of Venezuela which had rolled back its demonetisation drive after realising its pitfalls, Ms Banerjee again urged the Centre to withdraw its disastrous decision. “It is your money and you cannot withdraw it. Even if your monthly salary is Rs 15,000 you cannot take out your money,” she told the gathering. She even wondered if the people’s money kept in their bank accounts was safe.

Lashing out against Mr Modi for his strong advocacy of cashless economy, Ms Banerjee said the Centre is trying to take commission by forcing poor people to use Paytms and other digital methods of transanctions. “Why should the government dictate on how I will spend my money? Why should the government force the poor to use Paytms for a commission? Now the government will tell us which mobile phone or app to purchase. Before the election, he was a chaiwala. Now he has become Paytmwala,” she said.

Taking a dig at Mr Modi’s recent self-description as a “ faqir” she said it was the people who have become faqirs. “He calls himself a faqir. I leave it to you to decide what sort of a faqir he is,” she added.

Ms Banerjee warned that she will not allow anyone to disturb the prevailing communal harmony and peace in Bengal. Without naming the BJP, she said that divisive forces try to give even a genuine road accident a communal colour. She also resolved to ensure peace in the Jangalmahal. “The administration will ensure that blood is no more spilled in Jangalmahal,” she said.

Meanwhile, the chief minister launched the ‘Sabujshree’ scheme in Bankura district under which 15 lakh families will get a sapling for every baby born every year.

“A water supply project worth Rs 1,100 crore has been started,” she said.