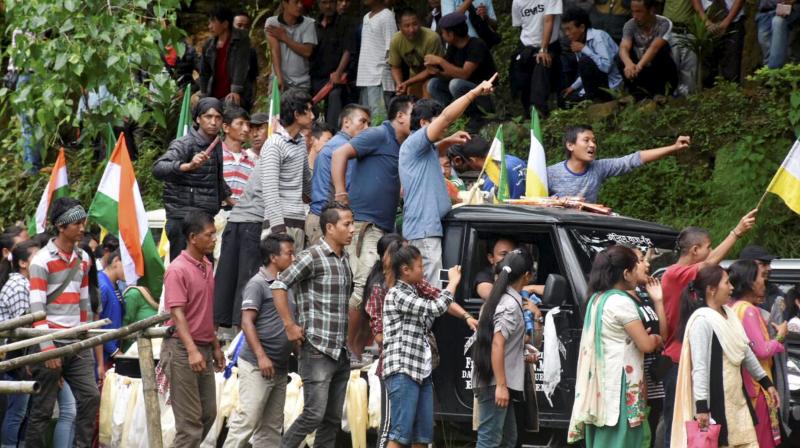 Gorkha supporters take part in the funeral of Ashish Tamang at Mirik near Darjeeling on Wednesday. (Photo: PTI)

Kolkata: Violence intensified in Darjeeling on Wednesday as Gorkha Janmukti Morcha (GJM) supporters torched a number of buildings, including a Trinamul Congress party office and a police vehicle as the party’s indefinite shutdown for Gorkhaland entered its 35th day.

As the Hills continue to burn, joint director of the Intelligence Bureau (East) Manoj Kumar Lal met chief minister Mamata Banerjee at the state secretariat Nabanna and held a meeting during which the security scenario in Darjeeling and the GJM’s style of movement were discussed in the wake of an intelligence report about the Hill partys’ links with some extremist outfits.

Senior police officers were also present at the meeting. The first incident of violence took place in the wee hours of Wednesday when a community hall was set on fire by the GJM workers at around 12.30 am. Dodging past the police personnel’s glare amidst darkness, the GJM activists sprinkled kerosene around Raj Rajeshwari Hall in Kurseong to set it ablaze.

The hall, with its ceiling made of wood, was used for Durga Puja every year. In the afternoon, a Trinamul party office and a police vehicle at Judgebazar were torched by angry GJM workers during a rally. Superintendent of police (Darjeeling) Akhilesh Kumar Chaturvedi said, “There was no provocation or even a verbal duel between the cops and the rallyists. We are searching for the accused.”

Later, the civic body and BDO office in Mirik were also torched. State tourism minister Gautam Deb strongly condemned the incidents of violence, arson and attacks on the public property in the Hills. He alleged, “The GJM workers went on a rampage and torched numerous state properties on the pretext of their peaceful movement over the past one month. It is now clear that they are trying to halt the peace process and normalcy in the hills. We oppose it.”