In three of the photographs, Dr Mitra and the Gitanjanli Jewels owner, another accused in the scam, are seen along with others at a meeting. 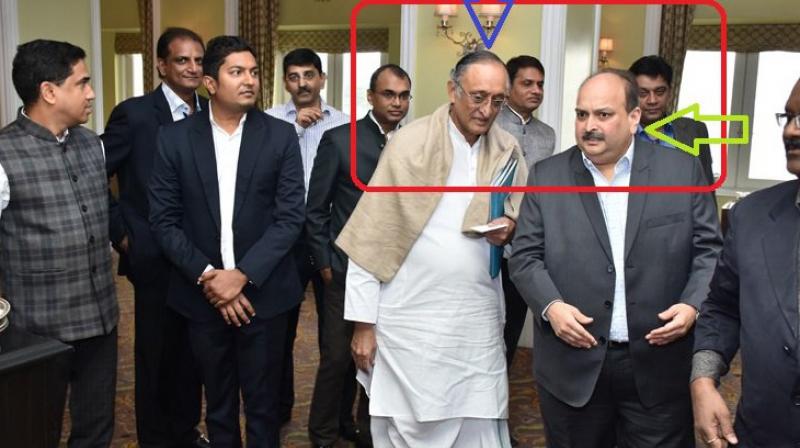 Kolkata: A couple of photographs showing state finance minister Amit Mitra with Mehul Choksi, uncle of diamantaire Nirav Modi, the absconding mastermind of the Rs 11,000 crore PNB scam, in a social networking site has led to a major slugfest between the Trinamul Congress and the Opposition parties.

Controversy broke out after state BJP president Dilip Ghosh uploaded four photographs on his Twitter account on Sunday in wake of chief minister Mamata Banerjee’s tirade against the Modi government over the bank fraud.

In three of the photographs, Dr Mitra and the Gitanjanli Jewels owner, another accused in the scam, are seen along with others at a meeting.

Slamming Trinamul supremo he wrote in his post, “What would Didi’s comments now be on these pictures? How will Amitbabu react to them? What will the so-called leaders of TMC have to say to the camaraderie & closeness that was evident between Amit Mitra & Mehul Chokshi during Bengal Business Summit organised in Mumbai on 4/07/17 under the leadership of Mamata Banerjee where Mehul Choksi was a special invitee to the event? He was seen interacting with Amit Mitra very closely. Does this mean that Mehul Choksi, Didi and Amitbabu share a special relationship and that he is Amit Babu’s confidante?”

The BJP, which has been in the backfoot since the publication of the photograph of Prime Minister Narendra Modi with Nirav Modi in Davos, sounded to have bounced back. Standing by Dr Mitra Trinamul secretary general Partha Chatterjee on Monday, however, rubbished the BJP’s allegations of proximity between the finance minister and Mehul.

Referring to Mr Ghosh’s post he argued at the Assembly, “Mr Ghosh did it because he had nothing else to do. Do not try to divert the attention. The photographs which have been shown were of a discussion which he attended responding to the call of the business houses and chambers. Apart from this, there is no other relation.”

He told Mr Ghosh, “Go and talk to Dr Mitra to know the bigger truth he has with him. It is the job of some people who hit the street without knowing the truth. Without guessing the depth of the water they jump in the water and die ultimately.”

The CPI(M), however, jumped in to attack the Trinamul Congress.

CPI(M) MLA Sujan Chakraborty alleged, “The finance minister of our state made arrangements to give a red carpet welcome to Mehul Choksi. He visited Mumbai. He was the Ficci secretary-general who tried to protect the interests of Prime Minister Narendra Modi. Instead of being in the interest of the state as its  finance minister, he is more in favour of a silent Modi or Mehul Choksi who committed the offence of bank fraud. The chief minister should be aware of Dr Mitra because he is her right-hand.”

Meanwhile, the Enforcement Directorate seized diamonds worth Rs 25 crores during its day-long raid in five different stores in the city of Gitanjali Jewels and other brands associated with it. The list of places includes a mall in south Kolkata from where diamonds worth Rs 3 crores were seized by the ED.