Ghosh said Bengal cannot remain untouched from the “BJP wave” in the country. 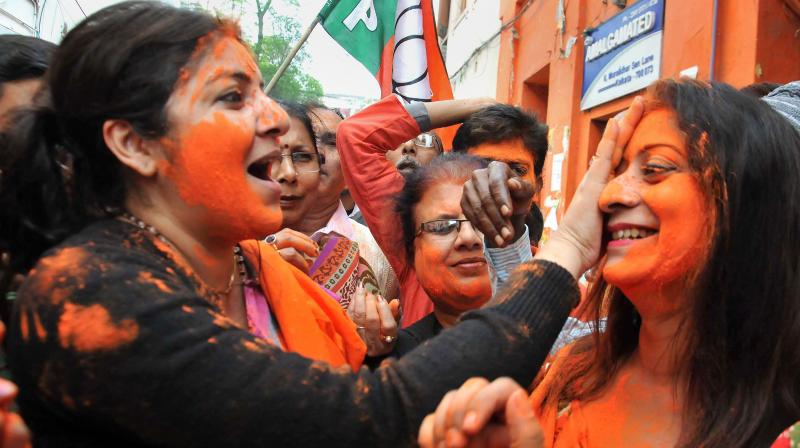 Kolkata: BJP workers burst crackers and distributed sweets at the party’s state headquarters here on Monday to celebrate its victory in Gujarat and Himachal Pradesh.

They began collecting outside the BJP office as trends showing the party leading in Gujarat and Himachal Pradesh were reported in the morning.

The party workers and supporters were seen dancing and smearing each other with ‘gulaal’ while celebarting the “historic day”.

Some were also carrying posters of party president Amit Shah and Prime Minister Narendra Modi. “This is a historic day for all of us. We have defeated all sorts of canards that were spread against us. In the days to come the results of Gujarat and Himachal will also have an impact in Bengal politics,” BJP’s West Bengal president Dilip Ghosh said.

The BJP inched towards a record sixth straight victory in Gujarat Assembly polls, and was set to evict the Congress in Himachal Pradesh, tightening the party’s grip over the country’s politics with general elections only 18 months away.

According to Election Commission tally at 5 p.M., the BJP had won 70 seats and was leading in 29 for a possible total of 99 in the 182-member Gujarat Assembly.