Next LS polls will be between Modi & rest of India: Gogoi. 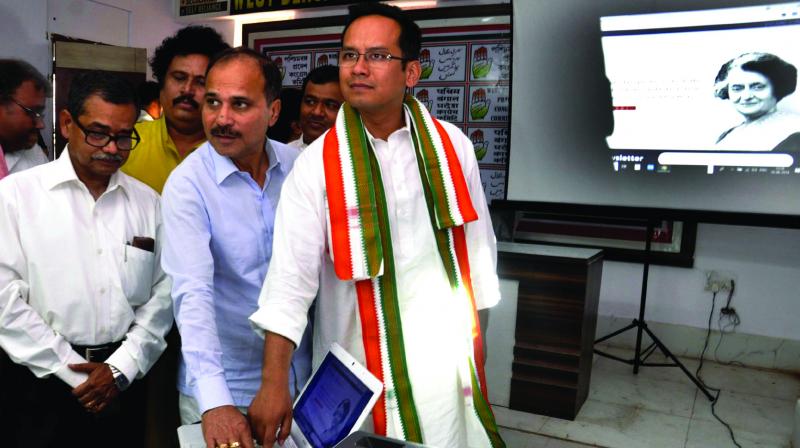 Kolkata: The new AICC in-charge of West Bengal Gaurav Gogoi on Monday claimed that the 2019 Lok Sabha polls would be fought between Prime Minister Narendra Modi and “the rest of India” and his party would form government in the Centre.

A close confidante of Rahul Gandhi, Mr Gogoi expressed confidence that Congress will improve its Lok Sabha tally in the next general elections and will form the government.

“To make a comeback is in our DNA because our values are in sync with what the society and the country wants and the people of this country are eagerly waiting to oust this anti-people government,” Mr Gogoi told reporters.

“The BJP tries to pitch this question as to who will fight against Modi. My answer is the next Lok Sabha elections will be between Modi and the people of this country. The farmers, business community, students, workers, entrepreneurs are angry against the Modi government,” Mr Gogoi said.

The people of this country will come out and fight against Modi government and will defeat the BJP and the RSS, he said. Mr Gogoi took stock of the party organisation in the state during the last two days.

Much to the dismay of the state Congress leadership, engaged in a tooth and nail fight with the TMC leadership, Mr Gogoi, however, refrained from speaking even a “single word” against the TMC government here.

Asked how does he plan to counter the TMC in the state which has been poaching on the Congress MLAs and its elected representatives during the last few years, he said “it is too early to reveal our strategy.”Gogoi said he would act as a bridge between the party high command and the state leadership and decisions would be taken in the “best interest of the party.”

“That is why we are having extensive talks with the state leaders and don’t want to ignore their views,” he said.

Asked if there is any chance of an alliance with the TMC  for the next Lok Sabha elections, he said “it is too premature” to say anything at this moment as the party is still in the process of listening to every opinion and an appropriate decision would be taken at the appropriate time.

Expressing hope of strengthening the party in West Bengal, Gogoi said he would tour the entire state and talk to the grass root leaders to have their feed backs to strengthen the party.“We are going to strenghten the organisation keeping in mind the next Lok Sabha and assembly elections in state,” he said.

Dwelling upon the violence during the last panchayat elections, he said it was “quite disappointing” to see in the atmosphere in which the rural polls were held in Bengal.