CM: West Bengal government will provide a compensation of Rs 2 lakhs to the families of the deceased. 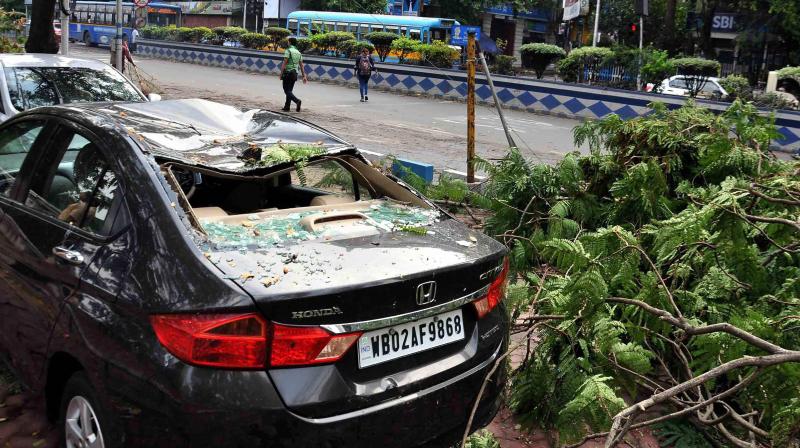 A damaged car and uprooted trees seen on the road after heavy storm and rain in Kolkata on Wednesday. More than eighteen people were killed across the state on Tuesday after strong winds of up to 98 km per hour hit the city and its adjoining areas, disrupting public transport and traffic. (Photo: PTI)

Kolkata: Eighteen persons were killed while several others were injured in the state during a deadly Norwester, which clocked a record windspeed close to 100 km per hour causing large scale devastation across Kolkata and districts.

Among the victims eight were from Kolkata where 4,500 people were affected alone.

The city has also been the worst-hit where 1050 houses were destroyed, 400 houses were partially damaged and 155 old buildings were damaged during the massive thunderstorm which disrupted transportation network: road, metro railway, train and flight services and snapped power supply. Besides 256 trees were uprooted while 225 electric posts were damaged across Kolkata.

The stormy Norwester hit Kolkata and five districts: Howrah, Hooghly, North 24 Parganas, South 24 Parganas and Bankura in between 7.30 and 8 pm with a windspeed of 82 km per hour, which turned violent as its speed soon reached 98 km per hour with thundershower, the Met department said.

On Wednesday, state disaster management minister Javed Khan said, “Kolkata did not experience such a dangerous Norwester in the last ten years. A report will be sent to chief minister Mamata Banerjee who monitored the situation on Tuesday night.”

Among the eight victims in Kolkata, was Mohammed Shahid Khan (40) who was standing near Gulshan Colony auto stand in West Chowbhaga of Anandapur with Sheikh Arzoo (35) at around 7.30 pm. Suddenly a portion of wall of the second floor of a four-storeyed under construction building collapsed and fell on them.

Shahid, a resident of Gobinda Khatick Road, died at the spot.

With injuries Arzoo of G J Khan Road has been admitted at CMRI. In Parnashree Nirush Minj (65) was standing on Diamond Harbour Road in front of Sree Durga Furniture while his son Joy Robinson Minj visited a nearby pet shop for the vaccination of their pet dog at around 7.55 pm.

A tree got uprooted and fell on Nirush, a resident of Gulepara Road leaving him dead.

At Lenin Sarani in central Kolkata, an auto-rickshaw driver Mohammed Manwar Alam (51) of Bedford Lane and his passenger Amreen Jawed (27) of Harsh Street lost their lives after a tree fell on the three-wheeler around same time.

Three more passengers were injured in the incident. At Kalakar Street in Posta a pedestrian Ankit Shukla (28) died after a potion of a wall at the top floor of a six-storeyed building got dislodged and fell on him at around 8 pm. Originally from Bauria in Howrah he was staying at a house on Kalakar Street.

At around 8.30 pm a large broken bough hit Pradip Kumar Sajjan (55) who was walking near Surendranath College.

The resident of Bisharpara in Airport area was rushed to Nil Ratan Sircar Medical College and Hospital where he succumbed to his injuries later. Six others were killed in Howrah.

While two more deaths were reported in Bankura, one each died in North 24 Parganas and Hooghly.

The CESC informed in a statement on Wednesday that its disaster management team attended a record number of faults following the Norwester.

In a statement it said, “The devastating norwester on April 17 evening which swept Kolkata disrupted CESC power supply specially in areas where the city is served by overhead wires.

The impact could have been worse, as the city’s underground cables remained largely unaffected.”

The CESC added, “There were, however, a number of cases where lamp posts belonging to other agencies eg Municipal Corporation were also affected. Amongst the affected areas were Northern and Eastern parts of the city, including Patuli, Panchasayar, Survey Park, Lake Town, Bangur, Dum Dum, Kamarhati, Khardah, Sodepur, Howrah and Serampore.”

The statement elaborated, “As usual, the norwester affected electricity

supply and there was a sharp surge in emergency telephone calls (1912) throughout the night. Fault reporting calls after the norwester rose to a record 36,000, as against the average fault reportings of 4000. CESC

A CESC spokesperson said, “Working on a day-and-night basis, more than 70 per cent of the faults could be restored through the night and it is expected that normalcy will be restored in most cases by Wednesday afternoon. Fortunately there has been no major outages and all the municipal drainage pumping stations worked smoothly during a trying time. We are keeping constant touch with the municipalities and are ready to take every step to alleviate the suffering of citizens.”