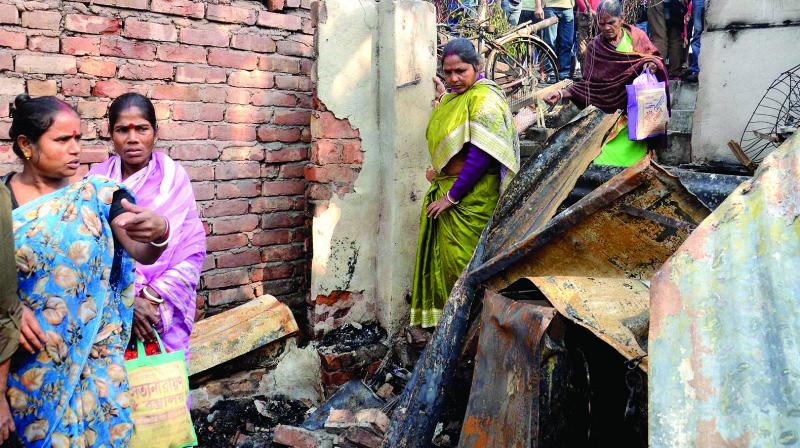 Slum-dwellers search their valuables in burnt houses after a fire in a Kolkata slum on Saturday. (Photo: PTI)

Kolkata: A teenage girl, who was preparing for the Madhyamik examinations, and her uncle were burnt to death and hundreds were left homeless in a devastating fire that gutted over two dozen shanties close to the railway tracks at Subhas Colony area in Patipukur, early on Saturday.

The victims were identified as Priya Adhikary (15) and her uncle, Nimai Adhikary (25). At around 2.30 am, the fire broke out at a hut in Mathpara bustee on Belgachhia Road near Patipukur fish market. Local residents claimed they heard a deafening sound following an explosion of an LPG cylinder in the slum.

With his hut on fire, Priya’s father Dilip Adhikary rushed out of his room and screamed for help to rescue his daughter and brother who were trapped inside. Dilip said, “My wife and younger daughter came out with me. But the smoke was so dense that my elder daughter and younger brother failed to come out.”

The situation aggravated as the flames spread and engulfed other huts, prompting the other slum-dwellers to flee.

Later, 17 fire engines were pressed into service to bring the fire under control. With the flames posing a threat, train services were suspended.

Priya and Nimai were brought out from two adjoining rooms by the fire brigade personnel. They suffered severe burn injuries. They were declared dead on arrival at R G Kar Medical College and Hospital. The bodies were sent for post-mortem.

Reportedly, three other slum-dwellers were also injured in the fire. They are undergoing treatment at the hospital. The situation was brought under control by 4.45 am.

Additional commissioner of police (headquarters) Supratim Sarkar said that both bound circular train services stayed suspended from 3.25 am to 5.40 am.

A Class X student of Shilpakala Shiksha Mandir school in Paikpara, Priya was good at studies. She stood second in the tests held before the Madhyamik exams, according to her family who has been living in the slum for the past 30 years.  Even on Friday night, Priya went to sleep late after finishing  studies.

Mr Basu said, “The Mayor has assured that rehabilitation and other facilities would be provided to the affected who have been lodged in two schools in the locality.”

Within a few hours of the first, another fire broke out at a hosiery factory in Burtolla. At around 6.15 am, dark smoke started billowing out of the factory at Fakir Chandra Chakraborty Lane. Many local residents fled for cover. Six fire tenders were pressed into service. The blaze was doused at around 8.40 am. No one was injured.

Earlier, a minor fire broke out at an IT firm’ office in Sector V of Salt Lake. But it was doused within an hour by the fire brigade. No one was injured in the incident.