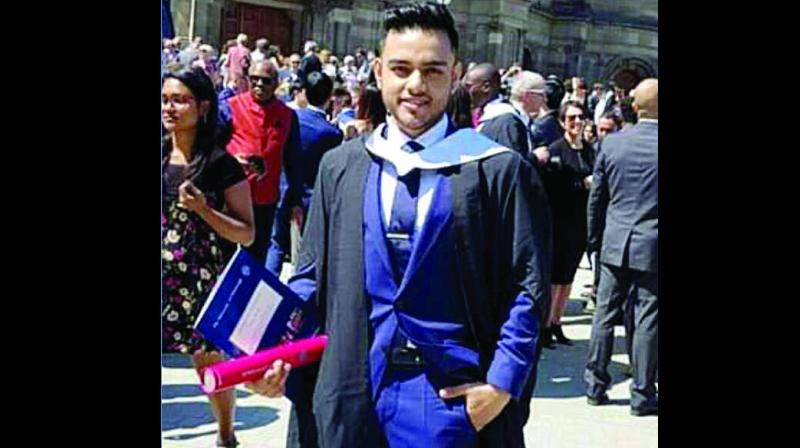 Kolkata: In yet another high-profile hit-and-run case, popular Biryani restaurant chain Arsalan owner Parvez Akhtar’s young son Arsalan Parwez allegedly crushed two Bangladeshi nationals to death under his Jaguar’s wheels after dashing a Mercedez and ramming into a Kolkata Police kiosk on Shakespeare Sarani at a high speed in the early hours of Saturday.

Hours after his escape, the police arrested him on non-bailable charges. Arsalan, who studied MA in business management at Edinburgh University in the UK between 2014 and 2018, will be produced at the court on Sunday. The police is likely to seek his for his custody. The Bangladeshi deputy high commission in Kolkata sought a report from the city police on the two Bangladeshi nationals’ death in the mishap, sources revealed.

The deceased Bangladeshis were Kazi Mohammed Mainul Alam (36) of Bhutiargati village at Jhinaidaha in Jessore and Farhana Islam Tania (30) of Jakir Hossain Road at Mahammadpur in Dhaka. Mainul was working at Grameen Phone. He is survived by his wife and a four-year-old son. Tania was an employee of a private bank.

Accompanied by Tania and his relative Ziyad, Mainul came to the city on August 14 for his eye-check-up at a private hospital where he had undergone treatment off EM Bypass earlier. They were staying at a hotel on Mirza Ghalib Street. At around 1.50 am when they were returning to their hotel after dinner, the Jaguar (WB 20AU 9797), hit them.

While moving towards Kala Mandir from Birla Planetarium direction it hit Mercedez, which was coming out of Loudon Street, preliminary investigation revealed. The black luxury car then rammed into the police kiosk before running over the three pedestrians, including the two Bangladeshi nationals. Arsalan (22) fled the spot.

Alam and Tania were rushed by the cops to SSKM Hospital where they were declared brought dead. The bodies were sent for post-mortem. The driver and passengers of the Mercedez were also injured in the accident.

Both the vehicles were impounded. After investigation, cops found that the Jaguar was registered with Arsalan restaurant’s address at Park Circus seven-point crossing.

But it remains parked at Arsalan’s ancestral residence in Beckbagan. Arsalan stays at an upscale housing apartment near Science City.