Durand Cup to return to ‘Mecca of Football’ 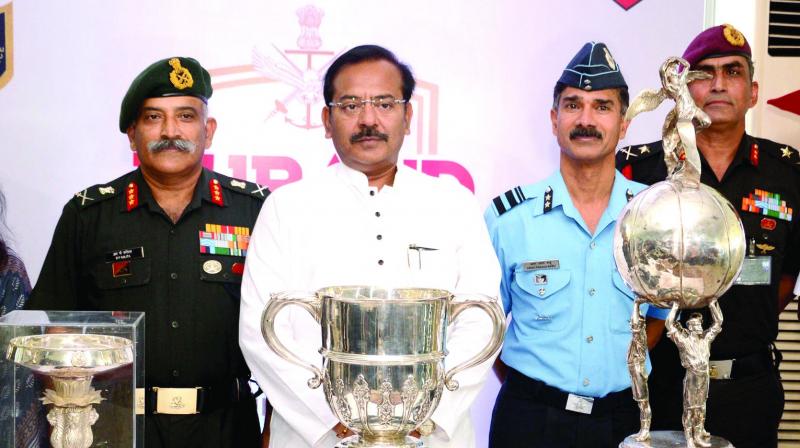 State sports minister Arup Biswas along with three service chiefs of Eastern Command with the trophy in a press meet on Durand Cup 2019 at Fort William on Wednesday. (Photo: Asian age)

Kolkata: After a gap of three years, Durand Cup, the world's third oldest and Asia's oldest football tournament, makes its return with its 129 edition which will be played for the first time in West Bengal in what appeared to be a good news for the football lovers of the state.

Chief minister Mamata Banerjee will inaugurate the soccer competition on August 2 at Salt Lake Stadium. This was announced by state sports minister Aroop Biswas at the Army Officers Institute in Fort William in th epresence of Chief of Staff of the Eastern Command Lieutenant General R.P.Kalita on Wednesday.

Mohun Bagan, which has won the trophy 16 times, and Mohammedan Sporting Club, the first Indian club to win the cup in 1940 when the tournament shifted to Delhi, will play the inaugural match. The tournament, hosted by the chairman, chiefs of staff committee and the three service chiefs from Army, Navy and Air Force, has been shifted from its homeland Delhi to Kolkata, known as the “Mecca of Football”, for the 129th edition.

The “City of Joy” will host the three-week-long tournament which will conclude on August 24 with matches being played at various venues in and around Kolkata. Sixteen  participating teams from across the country, including four teams from the Services, are set to bring out the competitive and true sportsman spirit to win the coveted trophies.

The tournament, first held in 1888 at Dagshai in Himachal Pradesh, is named after Mortimer Durand, who was the then British foreign secretary in charge of India.