West Bengal’s total debt stood at Rs 3.40 lakh crore, which is one of the highest among states. 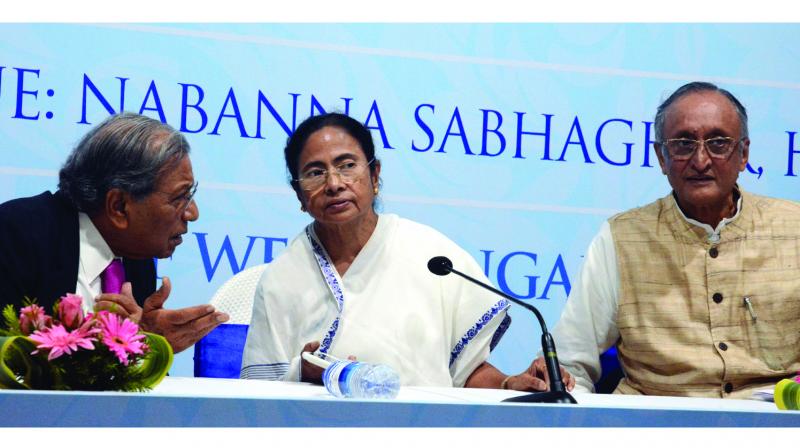 Kolkata: The 15th Finance Commission on Tuesday said it has taken a “serious note” of the West Bengal goverment’s debt overhang issue and would explore options within its mandate so that it does not remain a “permanent drag” on the state’s economy.

After holding a meeting with West Bengal chief minister Mamata Baner-jee, finance minister Amit Mitra and other officials, the commission’s chairman N.K. Singh lauded the state government’s performance during the past few years.

West Bengal’s total debt stood at Rs 3.40 lakh crore, which is one of the highest among states.

“The commission recognises that in the last few years, West Bengal’s economy has made enormous progress on Gross Domestic Product (GDP) growth, debt management and increasing its own tax revenue,” Singh told reporters after the meeting. He said the state government has submitted a detailed memorandum well in advance which enabled the Commission to understand specific demands. Ms Banerjee has been seeking loan waiver and generous Central funds for West Bengal and had met Prime Minister Narendra Modi in this regard last year.

Mr Singh further said that the chief minister placed a detailed set of comments, followed by observations along with presentations.

The state government has brought forward the need for the Finance Commission to look at the legacy issue of debt overhang and the innovative ways that this large debt overhang could be redressed in a manner that it does not become a permanent drag on the economy of the state, Mr Singh said.

As per the Terms of Reference (ToR) which has been determined by President Ram Nath Kovind, the Finance Commission would ensu-re that performance is not penalised in any way and efficiency and equity rewarded.

If interest payment of past debts forecloses the government’s revenue then, of course, that is a drag on which they would like to see a structural solution to what can be done, he said.

The state has made significant strides in many indices of human development, particularly in the fields of education and health which will have multiplier effect on the long-term growth of West Bengal’s economy, he said.

Describing the meeting as a “good one”, the chief minister said the state government is expecting the commission to consider debt restructuring proposal.

“It was a good meeting. We spoke about innovation, industry, agriculture. Our expectations are high, she added.

Ms Banerjee, during her address to the Commission, raised demands for increasing the state’s share in the divisible pool of indirect taxes from 42 per cent to 50 per cent along with a hike in the size of the pool.

Stating that her government has put a major thrust on asset creation and social welfare schemes, Banerjee also mentioned that there was no logic why well performing states should be victimised.