GJM MLAs claimed that as the ruling party had apologised, they didn’t take up the matter with the Election Commission. 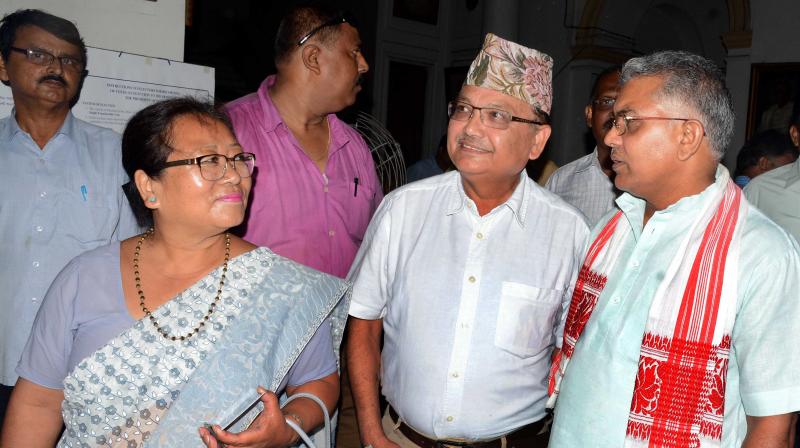 Kolkata: Trinamul MLA Paresh Pal got involved in a bitter verbal altercation with Gorkha Janmukti Morcha (GJM) MLAs as they stood in the queue to cast votes for the Presidential election at the state Assembly on Monday.

The incident happened at 12 noon when three GJM MLAs: Amar Singh Rai, Sarita Rai and Rohit Sharma, flanked by BJP state president Dilip Ghosh were standing in the queue to cast their votes.

Trinamul MLA Paresh Pal, who was standing much ahead, left his place in the queue and approached them. “You are burning the hills there in Darjeeling and now have come here to vote. Why have you all come here? Go back to Darjeeling. You people want a separate state and are maligning our government. Go to your Hills and cast your vote there,” Mr Pal, MLA from Beliaghata said.

Mr Rai reacted immediately. “Go and say this over there (in the Hills). This is a sacred premise and we have come here to perform our duty as a legislator”. State BJP president Dilip Ghosh intervened and asked GJM MLAs to stay away from the altercation.

After casting his vote, Mr Rai told reporters that it was unbecoming of a leader to behave in such a rude manner to a colleague. “Mr Pal’s intimation reveals his childish behaviour. lt is our duty to cast our vote,” Mr Rai said.

GJM MLAs claimed that as the ruling party had apologised, they didn’t take up the matter with the Election Commission.