BJP, TMC are like 2 kinds of poison: Brinda Karat

Karat tried to explain the vacuum created by the Left in a state it ruled for 34 years. 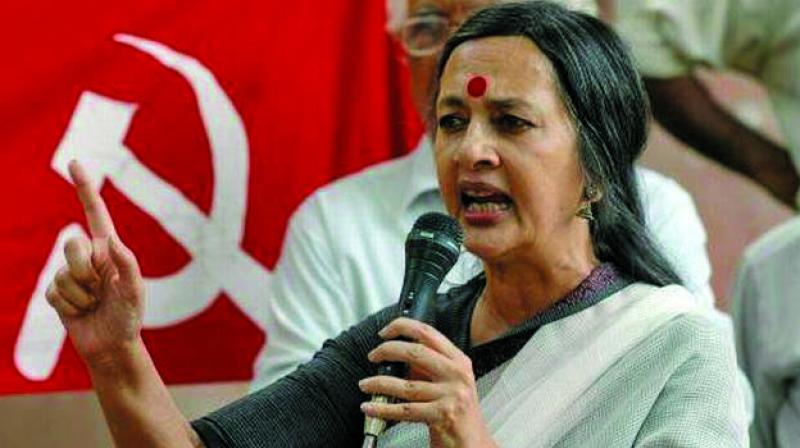 Belpahari (WB): “Whatever the brand, poison kills,” says CPI(M) Politbureau member Brinda Karat, warning people in West Bengal against voting for either the BJP or the state’s ruling TMC.

With the saffron party making inroads into the state and the fear that Left votes are getting transferred to it en masse, Karat tried to explain the vacuum created by the Left in a state it ruled for 34 years. “You can’t think that you can taste this poison or that. The TMC’s policies have led to great discontent among the people of Bengal against the party. The BJP is using its central-state powers and huge money to claim that it’s the only alternative here. It is like offering people two choices of poison —BJP and TMC,” Ms Karat said.

Sitting in the CPI(M) office in Belpahari, once a Maoist stronghold, around 200 km from Kolkata, she warned the electorate to not vote for either the Trinamool Congress or the Bharatiya Janata Party and said, “Whatever the brand, poison kills.”

Discussing the recent clashes in Kolkata, Ms Karat said it is shameful that participants in a procession led by BJP president Amit Shah vandalised and desecrated a statue of Ishwar Chandra Vidyasagar, a beloved symbol of the Bengal renaissance.

“This unprecedented action by these goons is shocking and condemnable and shows the real face of the sangh parivar and its culture. The TMC also played a role to provoke a confrontation as it is equally interested in creating an atmosphere of polarisation.  “The Elec-tion Commission must immediately release the unedited official footage of the procession and subsequent events. People of Bengal and indeed all citizens have the right to know the truth,” she said.

The extent of the BJP’s influence in West Bengal can be seen in Jhargram where the party won in all former Maoists strongholds  at the gram panchayat level.