MV SSL Kolkata was abandoned by its 22-member crew on June 14 off the Sagar Island in the Ganges Delta. 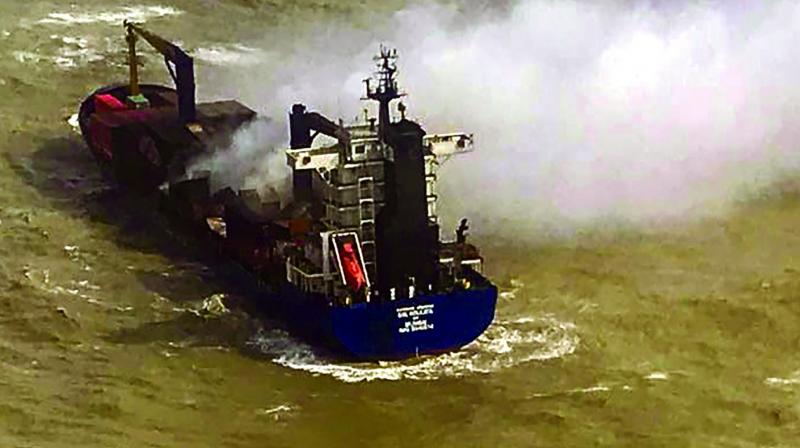 Kolkata: An Indian Navy specialist team led by a Marine Commando (MARCO) officer from Vizag arrested the movement of the burning MV SSL Kolkata on Saturday morning from drifting towards Bangladesh along the international maritime boundary line (IMBL) in the Sundarbans delta of the Bay of Bengal by anchoring the cargo ship in the sea amidst a series of explosions on board in a daredevil operation which lasted barely for an hour.

The container vessel's rapid movement with towards the IMBL caused ecological as well as national concerns among various security agencies as it could not be anchored when its 22 crew members were rescued by the Indian Coast Guard (ICG) in a brave operation amidst a devastating fire and a rough sea on June 14 morning 55 nautical miles off Sagar Island.

Early in the morning a Seaking 42C helicopter of the Eastern Naval Command (ENC) took off with the Naval specialist team including the MARCOS, divers and members of Seamanship and Shipwright wings and three crew members of the MV SSL Kolkata from the Kalaikunda Air Force Station (AFS) in West Midnapore for the mission. At around 9.30 am it winched down a MARCO officer on the ill-fated container vessel.

The MARCO officer ascertained the conditions in the forward part of the ship, a Navy statement said. He then called in the helicopter to lower onbord three crew members of the ship, the statement added while elaborating, “The team quickly managed to drop the starboard anchor from the ship to prevent her from drifting any further. It prepared the seamanship gear for the ship to be towed if required.”

INS Kadmatt, also sent from Vizag, was also deployed to support to the helicopter operations at the sea and provide all possible assistance. Suddenly four explosions rocked the merchant ship one after another across its central part where the source of fire and smoke is located, according to sources adding that the the blasts reignited the flames.

The Seaking 42C helicopter skillfully recovered all four members and returned to Kalaikunda AFS completing the operation swiftly. The operation was monitored from Maritime Operations Centre at INS Netaji Subhas by Naval Officer In Charge (West Bengal) Commodore Suprobho K De who liaised with the officials of the DG Shipping, ICG, KoPT, the ship owners, agents and salvage specialists at Kolkata for its planning.

Commodore De informed that there were directions from the ENC Flag Officer Commanding-in-Chief Vice Admiral Karambir Singh to stop the drift of the burning ship towards the Sunderbans delta “at all costs.” Besides, the drifting ship posed a serious ecological threat because of the high temperatures onboard, should the ship capsize on the sandbanks causing pollution from the oil on board.

Senior Navy officials underlined that the primary aim of the operation was to arrest the uncontrolled movement of the abandoned merchant ship which was achieved by the special team. Despite strong winds and some explosions on board during the operation, the team was able to drop the anchor of the vessel in a controlled manner, they explained.