A nurse, who left for Manipur earlier this week, said safety concerns and parental pressure were the two main reasons she quit her job 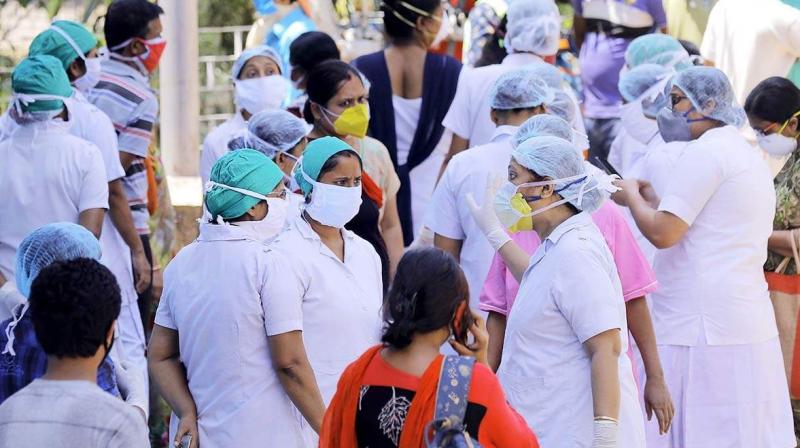 Kolkata: The healthcare sector in Bengal is staring at a major crisis as over 300 nurses have quit their jobs at private hospitals here and left for their homes in Manipur and other parts of the country amid spurt in COVID-19 cases.

The Association of Hospitals of Eastern India (AHEI), a non-statutory body with 17 private medical facilities in Kolkata as members, has written to Chief Secretary Rajiva Sinha seeking his intervention in resolving the crisis.

At least 185 nurses left for Manipur earlier this week. On Saturday, 169 followed suit -- 92 hailing from Manipur, 43 from Tripura, 32 from Odisha and two from Jharkhand, sources at the city's private hospitals said.

In his letter, Pradeep Lal Mehta, the president of the AHEI, said, "Although the exact reason why they are leaving is not known, we have found out from other nurses still on duty that the state government of Manipur is offering them a lucrative stipend to return home."

Taking to Facebook, however, Manipur Chief Minister Nongthombam Biren Singh rubbished the claim and said, "No such advisory has been issued by the state. We are not asking anybody to return. We feel proud of them as they serve the patients in Calcutta, Delhi and Chennai."

"We have already said that we will compensate and reward them for treating COVID-19 patients. But if the nurses,doctors don't feel comfortable in the hospitals where they are working that's up to them. I cannot force them to stay there. It's their choice. That might be the reason why they are coming back," Singh said in a video address.

A nurse, who left for Manipur earlier this week, said safety concerns and parental pressure were the two main reasons she quit her job.

"Our parents are concerned and we are stressed as the cases here are rising every day. Our state is a green state and we wish to go back. Our state government is helping us. Family and parents are our priority," one of the nurses said when contacted over phone.

A senior official at Bhagirathi Neotia Woman and ChildCare Centre in central Kolkata said many nurses have submitted resignations, while some have refused to report for work.

"That they were going to leave (the state) was obvious," he said.

Meanwhile, sources in the health department said the government has sought information on nurses, including their place of origin, from different hospitals here.

Letters have been sent to the respective hospital authorities, the sources added.