No violence on 31st day of strike

The Hills witnessed violence despite continued deployment of three columns of the Army in Darjeeling, Kalimpong and Sonada. 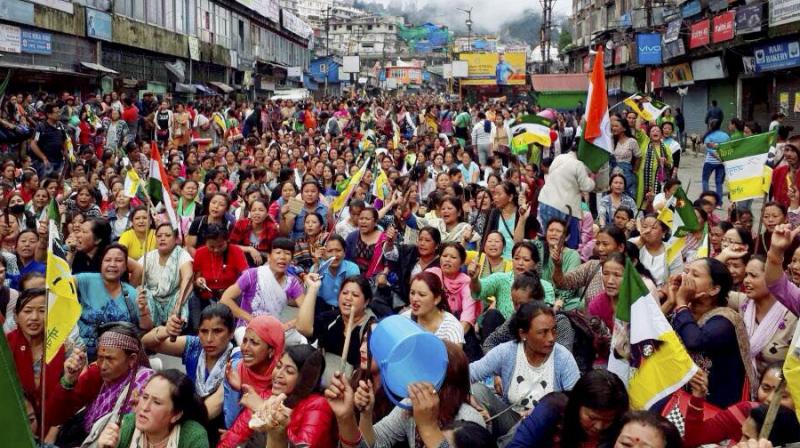 Nari Morcha members during their Khukri rally for the separate state of Gorkhaland, in Darjeeling on Friday. (Photo: PTI)

Darjeeling: Pro-Gorkhaland activists took out rallies in Darjeeling as security forces maintained a tight vigil across the Hills on Saturday — the 31st day of the indefinite shutdown for a separate state.

No incident of violence or arson was reported by the police this morning, but the Hills remained on the edge, a day after agitators went on a rampage, setting afire an RPF office, a state-run library and a police outpost here.

With the Gorkha Janmukti Morcha (GJM), which spearheaded the demand for the separate state of Gorkhaland,  planning rallies on Saturday in various places, the police and security forces patrolled the streets of the Hills and kept a tight vigil at all entry and exit routes.

Except medical shops, business establishments, restaurants, hotels, schools and colleges remained closed. Meanwhile, the district administration has extended the ban on internet services till July 25. The ban was imposed on June 18.

With food supply severely hit due to the indefinite strike, which entered the 31st day on Saturday, the GJM and various NGOs of the Hills distributed food items among people. The Hills witnessed violence despite continued deployment of three columns of the Army in Darjeeling, Kalimpong and Sonada.