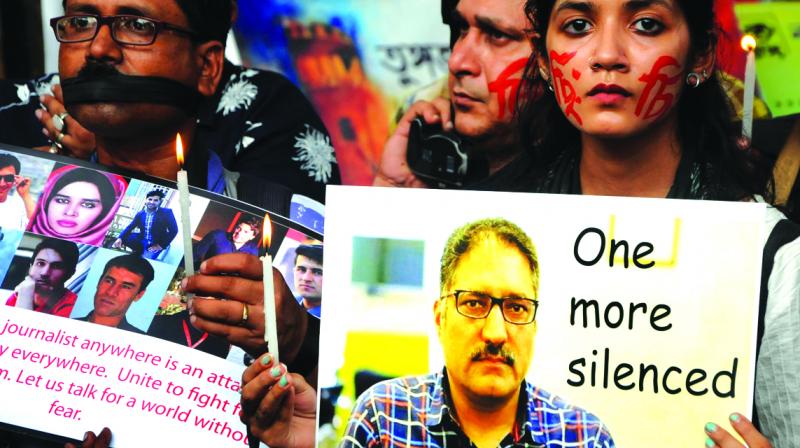 Mediapersons in a silent protest in front of Academy of Fine Arts on Friday, against the killing of journalist and editor Shujaat Bukhari in Kashmir and other media persons, those ware killed earlier. (Photo: Abhijit Mukherjee)

Kolkata: A specialist team of the Indian Navy, including its elite Marine Commandoes (Marcos), from Vizag will be in action with a helicopter and an aircraft with a warship for anchoring MV SSL Kolkata in the Bay of Bengal on Saturday morning as the fire-ravaged container vessel has drifted towards the international maritime border line in the Sundarban delta between India and Bangladesh which has caused a concern.

Sources told this newspaper that the ten-member Navy team includes experts from Seaman and Shipwright wings apart from some MARCOS who will slither from Seaking 42C helicopter of the navy for anchoring of the merchant vessel which was devastated by the fire off Sagar Island on Thursday. Braving a rough sea the Indian Coast Guard (ICG) rescued 22 crew members who were on board to the ship.

The fire has reduced on Friday. But it is yet to be doused completely. Judging the movement of the ship, a crucial meeting was held on at the Marine House in Kolkata on Friday.

It was chaired by S Barik, principal officer and joint director general of the mercantile marine department of the shipping ministry, according to defence ministry sources.

Those who were present were officials of the ICG, IRS Surveyor and Chief Staff Officer to the Naval Officer In Charge (West Bengal) and director (Marine) of the Kolkata Port Trust, a representative Shreyas Shipping, the owner of the ill-fated vessel, sources revealed.

Based on the decisions of the meeting, a Seaking 42C chopper and a Dornier aircraft of the Navy from Visakhapatnam have been mobilised to curtail the ship's north-easterly drift, sources disclosed adding that INS Kadmatt has also been dispatched from Vizag to provide all necessary support for helo operations at sea.

The chopper and Dornier are both positions at Kalikunda Air Force Base for Saturday's mission. With first light of Saturday the Seaking 42C chopper with four crew members of the ill fated ship and the Naval specialist team will airlift from Kalaikunda Air Force Station and winch down on board the ship to drop the anchor.

ICG Inspector General (North East) Kuldip Singh Sheoran informed that two off-shore patrol vessels and two Dornier aircrafts of the ICG are maintaining round the clock surveillance and monitoring the status of the vessel. "The smoke and fire on the upper deck have reduced. As of now no oil-leakage has been observed," he added.