An unidentified number of people were also injured as people rushed to board a vessel. 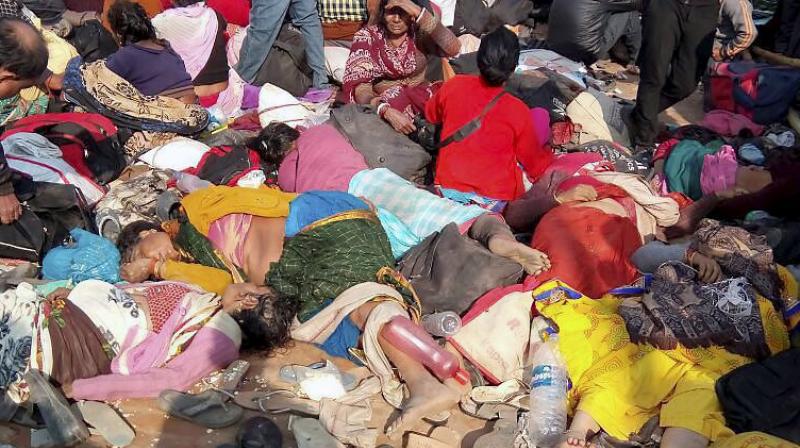 Chaotic scene after the stampede at a jetty at Kachuberia in South 24 Parganas. (Photo: PTI)

Kolkata: At least six people died on Sunday in a stampede at jetty 5 in Kachuberia in Sagar Islands in South 24 Parganas.

An unidentified number of people were also injured as people rushed to board a vessel. The state government, however, denied stampede as the reason and attributed the deaths to “heart attack and excessive cold”.

“Last night, some pilgrims, including women, had fallen sick after taking the holy dip on the occasion of Makar Sankranti while returning from the site of Gangasagar Mela. The sick were admitted at the camp hospital near Kachuberia and were attended to by a team of doctors. Most of them were treated and discharged. However, unfortunately, six of them died early in the morning,” minister of state, Sunderban development, Manturam Pakhira claimed.

District official sources, on the other hand, said the stampede took place around 6 pm when a huge rush of pilgrims tried to board vessels to reach Kolkata. A search has been launched by naval divers to find out anybody who might have fallen into Buriganga river during the stampede, they added.

Sources said the deceased are mostly from outside West Bengal. Two of the deceased have been identified as Mira Devi (52) and Kalu Yadav from Bihar. One Rajasree Shibshankar Tambe of Maharashtra broke her leg while making her way through the crowd and has been admitted at a local hospital.

This year, at least 16 lakh pilgrims took their holy dip in two days at Gangasagar and offered prayers at the Kapil Muni ashram. The state government had taken a number of measures to avoid any untoward incident this year by deploying around 9,000 policemen and volunteers and setting up 165 CCTVs across the area.

District magistrate, South 24 Parganas, P.B. Salim said apart from the six deaths at Kachuberia, two persons have died in Sagar Islands and one at Namkhana since Saturday. All these deaths, he claimed, "are either due to cold or heart attack as informed by the doctors". The death toll at Gangasagar this year thus rose to nine as compared to eight last year, he said.