Tamang was hacked to death in Darjeeling town on May 21, 2010 when he was overseeing preparations for a public meeting. 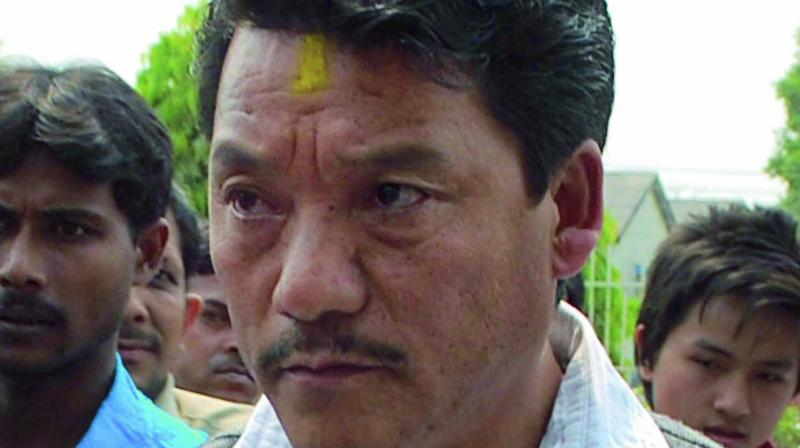 Kolkata: The Calcutta High Court on Wednesday allowed anticipatory bail prayer of Gorkha Janmukti Morcha chief Bimal Gurung, his wife Asha and 20 others in connection with the murder of All India Gorkha League leader Madan Tamang.

The bench directed that charge should be framed in the murder case by February 1, 2017 before the designated CMM court here.

The bench also directed that all accused should be present in Kolkata a day before the framing of charge against them and none of them would be able to leave the jurisdiction of Kolkata Metropolitan Court without the court’s leave till disposal of the trial.

The court directed that if any of the 22 petitioners have been arrested during pendancy of the anticipatory bail petition before it, he/she would be granted bail in connection with the case within three weeks by furnishing a bail bond of Rs 10,000 each.

Tamang was hacked to death in Darjeeling town on May 21, 2010 when he was overseeing preparations for a public meeting.

The CBI had on May 29, 2015 filed a charge sheet against the GJM leaders under IPC sections for murder and criminal conspiracy in the Tamang case.

The investigating agency had filed the final supplementary charge sheet before the court against Gurung, who is also the chief of Gorkhaland Territorial Administration (GTA) in Darjeeling, his wife Asha, former GJM leader Harkabahadur Chettri, GJM Assistant General Secretary Binoy Tamang, Pradeep Pradhan, Deputy Chief Executive of GTA Col Ramesh Allay and 17 others for criminal conspiracy, murder and other charges.

Prime accused in the case Nickol Tamang had, however, disappeared mysteriously from the Pintail village near Siliguri, in August 2010 where he was being held by the state CID for interrogation following his arrest.

Pema Tamang, wife of Nickol, had moved a habeas corpus petition before the Calcutta High Court praying that her husband be traced.

The high court had then directed the CBI to take up the Madan Tamang murder case and the Nickol Tamang disappearance case.