. The police has been entrusted for investigation and taking lawful steps. Besides the metro project work has been underway. 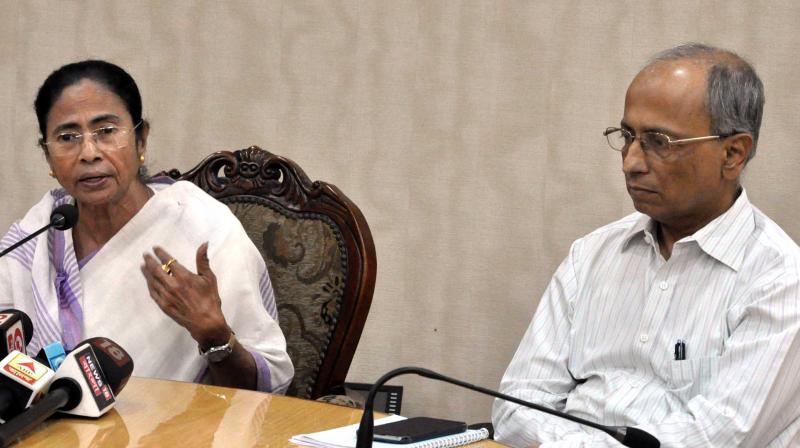 Chief minister Mamata Banerjee along with chief secretary Malay De at a press meet at Nabanna on the flyover incident and her forthcoming foreign tour in Kolkata. (Photo: Asian Age)

Kolkata: Clearly admitting the negligence of her government’s behind the collpase of a major portion of Majherhat Bridge ten days ago, the chief minister Mamata Banerjee on Friday announced an immediate demolition of the 50-year-old bridge in Taratola. She declared that the new bridge would be built within a year. According to Ms Banerjee, the state government’s public works department (PWD) should have taken steps much earlier. She informed at the state secretariat: Nabanna that chief secretary Malay De who headed the investigation committee for the accident, reached a conclusion after holding meetings of 30-40 rounds.

“He has correctly pointed out some issues. One of them is that it was the responsibility of the PWD to take steps when it came to know about the status of the bridge in 2016 although papers on various other bridges can not be traced still,” Ms Banerjee elaborated. She mentioned, “Even though the PWD is our department, it would not be shown any mercy. Precaution should have been taken by allowing only light vehicles to ply through the bridge instead of wasting time for exchanging files. So the PWD can not escape its responsibility. The police has been entrusted for investigation and taking lawful steps. Besides the metro project work has been underway. But I did not stop it.” The chief minister, however, added that the Metro project’s repercussions as one of the possible reasons for the collapse. She said, “the chief secretary also suggested of the demolition of the old bridge. Some people had suggested of setting up a Bailey Bridge there. But it will not serve any purpose because only small vehicles will ply through it in that case. So the old bridge will be demolished and the new one will be built in a year.”

Ms Banerjee underlined that a three member team, headed by Kolkata Mayor Sovan Chatterjee, carried out a survey around the bridge to explore alternative routes of vehicular movements. Besides her government has requested the railways to build a level-crossing in the area with an offer to bear the expenditure.

Ms Banerjee argued that in case of Vivekananda Road Flyover, the government is yet to decide what to do even after three committees’ opinions, because there is a possibility of further loss of lives in case it is demolised. But if it is left as it is, it also cannot be done because it has a faulty design.