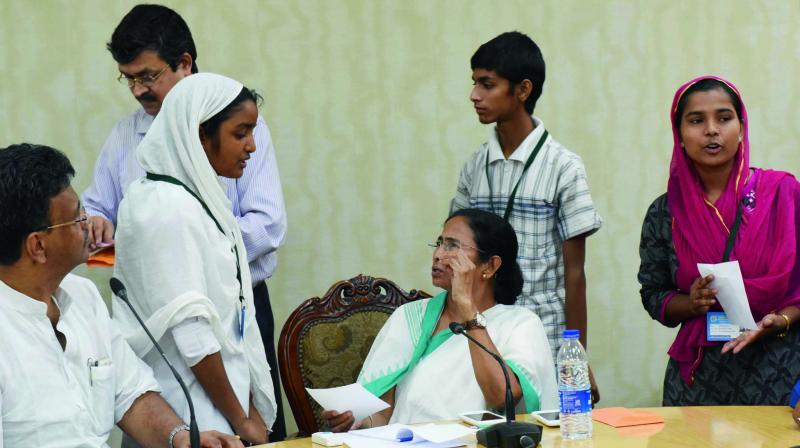 Chief minister Mamata Banerjee talking to one of the successful Madrasa students who were felicitated at Nabanna on Wednesday. (Photo: Abhijeet Mukherjee)

Kolkata: Chief minister Mamata Banerjee met governor Keshari Nath Tripathi at Raj Bhavan on Wednesday to discuss the crisis at the Hills, a day after the union home ministry sought a report from the West Bengal government on the violence in Darjeeling.

Ms Banerjee, accompanied by Trinamul Congress minister Aroop Biswas, went to Raj Bhavan at around 12.45 pm, according to sources.

The meeting lasted for nearly half-an-hour, during which she briefed Mr Tripathi on the unrest prevailing in Darjeeling, sources added. The chief minister left Raj Bhavan at around 1.10 am.

In a tactical move,  apparently to make its presence felt in the Gorkhaland Territorial Administration (GTA), the state government also removed IAS officer, Donbosco Lepcha, from the post of the GTA’s secretary and appointed him as 1st L.A. Collector and Collector, Stamp Duty, Kolkata.

According to him, even if the entire troops of the central reserve police force were to be deployed, the GJM would not drop the demand of Gorkhaland. “The police is behaving like the cadre of the Trinamul Congress,” he alleged. Mr Gurung also declared that the GJM’s movement would intensify in the coming days.

He warned tourists to stay away from the hills as the shutdown called by the GJM entered its third day. Mr Gurung said, “The tourists are not welcome here as they may face problems. There will be protests and strikes in the hills.” Mr Gurung also said he would resign from the post of GTA chief executive shortly.

However, he also made it clear that the GJM MLAs would not resign from the West Bengal Assembly. Slamming the GJM chief’s commentson the broil, state tourism minister Gautam Deb said, “Darjeeling is no one’s property. He should not make such comments. No one is above the law.”