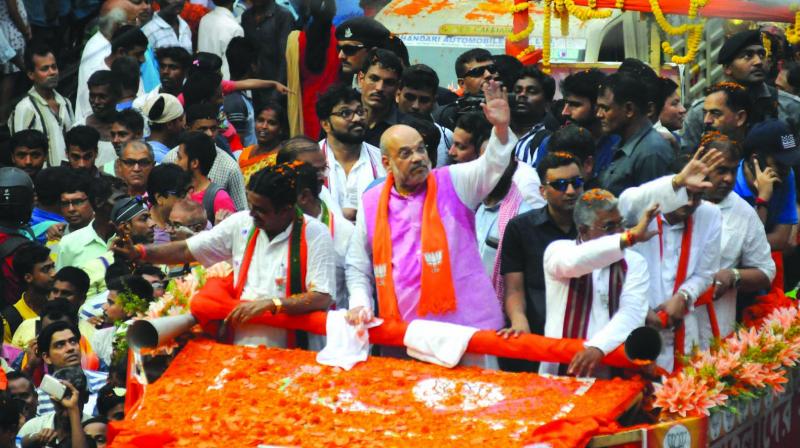 BJP president Amit Shah waves at supporters during a roadshow ahead of the last phase of the Lok Sabha polls in Kolkata on Tuesday. (Photo: Abhijit Mukherjee)

Kolkata: Bengali polymath Ishwar Chandra Vidyasagar’s statue was vandalised during two rounds of violent clashes, including arson, between Trinamul Congress and BJP supporters, marring BJP president Amit Shah’s mega roadshow in central Kolkata on Tuesday evening. Sixteen people involved in the clashes were arrested. Furious over the violence, TMC supremo and chief minister Mamata Banerjee accused the BJP of destroying the icon’s statue, before visiting the college at night to take stock of the extent of damage.

She announced a protest rally on Wednesday against the vandalisation of the bust of Vidyasagar. Threatening to capture the BJP office in “a second”, she also declared to spare none.

To counter the West Bengal chief minister’s allegations, Mr Shah put the blame on her party for the violence. He also complained that the Election Commission has been silent on complaints of violence perpetrated by Trinamul workers during the ongoing Lok Sabha polls.

As the violence broke out, Mr Shah was escorted to safety by police but was forced to cut short the jamboree. The afternoon roadshow by the BJP chief, who on Monday dared Ms Banerjee to arrest him, was marked by controversy since beginning.

It was earlier scheduled to start from Sha-hid Minar in Esplanade before ending at Swami Vivekananda’s house in Manicktala. The location was changed to Dharmatola later due to lack of permission. When the grand campaign rally was passing by Calcutta University on College Street in the evening, a group of supporters rushed out and showed black flag shouting “Amit Shah Go Back” slogan. Agitated, the BJP activists hurled water bottles and pelted stones on them.

The area turned into a war zone instantly with both sides engaged in a street-fight. The second round of clash unfolded at around 6.45 pm when the roadshow was near Vidyasagar College (New Campus) at 17 Bidhan Sarani in Amherst Street area.

Violence erupted after stones were pelted on the procession allegedly by Trinamul supporters from the college campus.

In retaliation, BJP workers torched two motorbikes and a cycle. Storming the college with sticks and rods they went on the rampage and triggered arson. Shards of broken glass littered the lobby of the college where a bust of Vidyasagar, a noted philosopher and a key figure of Bengal Renaissance, was smashed to smithreens.

Lambasting Mr Shah, Ms Banerjee said, “Each vote against the BJP will be revenge for attack on Vidyasagar’s statue. Mr Shah brought people from Uttar Pradesh and Rajasthan in his rally. The BJP workers broke Vidyasagar’s statue to pieces. Such a shameful incident never happened in Kolkata earlier, not even during the Naxalites’ time. It will take a second to take over the BJP office if we want.”

Calling Mr Shah a “goonda”, she earlier told a rally in Behala in the city, “If you lay your hands on Vidyasagar, what will I call you other than a goonda.”

Coundering the TMC chief, Mr Shah said, “There was an attempt by TMC hooligans to attack me. Mamata Banerjee tried to provoke violence. But I am safe.”

The BJP president said, “I appeal to the people of Bengal to give their reply to violence through their votes peacefully in the last phase of the election. Defeating the Trinamul is necessary to end violence in Bengal forever.

In a rare charge of bias against the EC, the BJP president said, “History-sheeters are arrested across the country but in Bengal the EC has turned a blind eye to the Trinamul. If the EC has to maintain its establishment, it has to order the arrest of the goons roaming freely.”

The Trinamul Congress alleged that the BJP brought “outsiders” for his road show in Kolkata who were responsible for the violence.

Ms Banerjee also raked up Mr Shah’s “Kangal Bangla”’ remark and said that Mr Shah should be made to squat holding his ears for it.

She alleged that the BJP is transporting money in CRPF vehicles for distribution among people of the state.

Before the clashing mobs took over the streets of central Kolkata, Mr Shah led a saffron surge in parts of the city as chants of “Jai Shri Ram, Jai Jai Shri Ram” alternated with frenzied chorus of “Modi, Modi”.

Clad in a kurta-pyjama ensemble and a pink Modi jacket to boot, Mr Shah smiled broadly from atop an open roof vehicle, waving at people and thrusting a clenched fist into the air while a massive crowd followed him in the BJP’s show of strength five days before the final phase of general election.

A virtual carnival unfolded during the roadshow. Women in traditional Bengali white sarees with red borders, tribals donning the BJP’s trademark saffron turbans and carrying bows and arrows danced as the caravan inched through the cramped streets of the capital city.

With the state polarised along communal lines like never before during an election, the parade had men dressed like Ram, Hanuman and the “Vanar Sena”, the army of apes that helped the Lord defeat demon king Ravan, according to epic Ramayana.

BJP workers and supporters lined the streets, as did curious onlookers.The party’s Kolkata north and Kolkata south candidates Rahul Sinha and Chandra Kumar Bose were on the vehicle with Mr Shah.

Mr Shah declared that the BJP will win more than 282 seats in the Lok Sabha election, the number of constituencies it had clinched in 2014.

TMC spokesperson Derek O’ Brien wrote on Twitter, “Desperate BJP goons from outside Bengal smash statue of Ishwar Chandra Vidyasagar inside the college. Violent mob of BJP ‘outsiders’ in presence of ‘Pukeworthy’ Shah. How little you know about Bengal, its rich history, its culture. Bengal will never forgive for what you did today. (sic).”