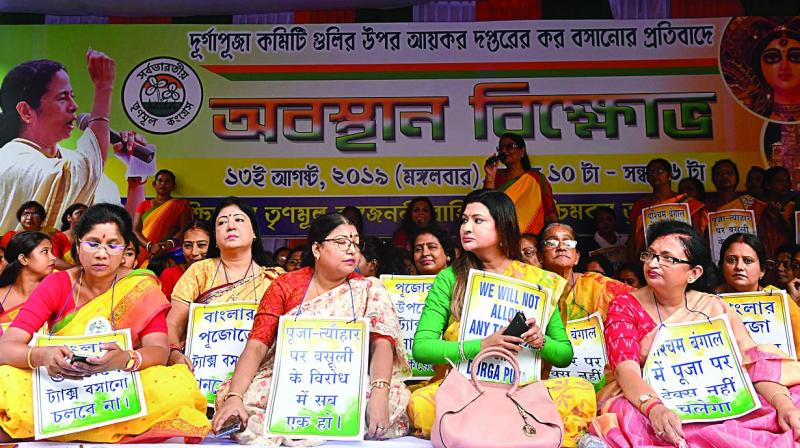 Trinamul Congress MLA Nayna Bandyopadhyay along with the members of Banga Janani Vahini during a protest against income tax notices being served to several Durga Puja committees in Kolkata on Tuesday. (Photo: PTI)

Kolkata: Within two days of chief minister Mamata Banerjee’s claim of the Income Tax (IT) department's notices to Durga Puja Committees for tax, the Centre has hit back  at her government as the  Trinamul Congress organised a sit-in demonstration in the city.

On Tuesday the Central Board of Direct Taxes (CBDT) under the department of revenue of the finance ministry rebutted “incorrect reports” about IT notices to Durga Puja Committees. It stated that no such notice was served.

The CBDT elaborated, “However, as the department had been getting information that several contractors who were doing work for the Puja committees were not paying due taxes, therefore notices under Section 133(6) of the Income Tax Act, 1961 were issued in December, 2018 to about 30 committees, calling for details of tax deducted at source on payments made to contractors and event managers etc. engaged by the committees for the Puja events, including the TDS statement.”

It added, “This was part of an exercise carried out by the TDS wing of the department to ensure that the contractors and event managers pay their due taxes on time. Many of the committees complied and furnished evidence of tax deducted at source as well as deposit of the same into the government account. It is also pertinent to state that several committees requested the department to organise educative sessions to explain the provisions of TDS to the committees.”