The BJP, the CPI(M) and the Congress claimed she is behaving like Hitler and not interested to solve the impasse. 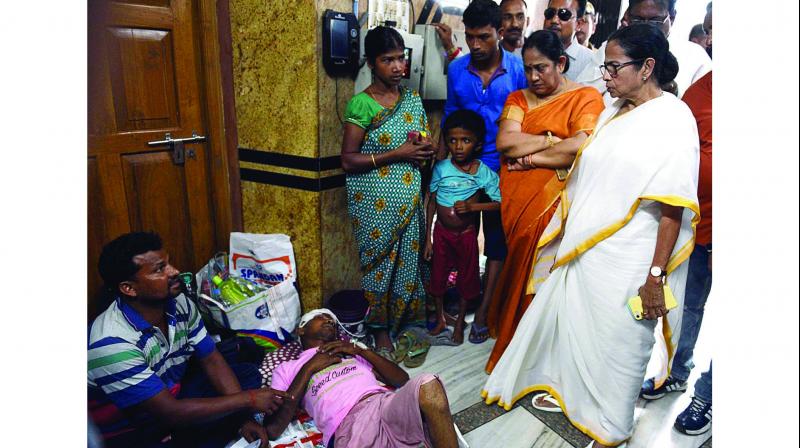 Kolkata: The opposition parties in West Bengal slammed chief minister Mamata Banerjee on Thursday for her alleged threats to the striking doctors and sought her immediate resignation as health minister.

The BJP, the CPI(M) and the Congress claimed she is behaving like Hitler and not interested to solve the impasse.

In the wake of disruption of medical services in several parts of the state over the past three days, Ms Banerjee directed the agitating junior doctors to resume work and warned of action if the order is not followed. The doctors, however, decided to continue their stir.

“Instead of expressing solidarity to the doctors, she is threatening them. He is behaving like an authoritarian, like a Hitler. This is shameful. She has failed both as the chief minister and the health minister. She should resign immediately,” BJP leader Mukul Roy said.

State BJP vice-president Jay Prakash Majumdar said that Ms Banerjee was indulging in blame game instead of solving the problem.

“Is this a way to deal with the agitating doctors? Instead of solving the problem, she is blaming the doctors, the BJP and others. If she can’t control the situation, she should resign as the health minister,” Mr Majumdar said. He also criticised Ms Banerjee for referring to Union home minister and BJP president Amit Shah during her speech on Thursday morning.

“BJP chief Amit Shah is encouraging his party cadre to create communal tension and run propaganda on Facebook,” she said and claimed that the doctors’ agitation is a conspiracy of the BJP and the CPI(M).

“She is trying to hide her failures by blaming others. If she can’t control the situation, she should resign and let us take over. We would show her how to solve problems,” Mr Majumdar said. Accusing the CM of politicising the issue, CPI(M) central committee member Sujan Chakraborty said that Ms Banerjee does not seem interested in ending the impasse. “Is she is at all concerned about solving the problem, or does she just want to politicise the matter?” he said.

State Congress president Somen Mitra also criticised the CM and said that  the government should take appropriate measures to ensure the safety and security of doctors.

CM: Take care of all patients in state

West Bengal chief minister Mamata Banerjee on Thursday wrote to senior doctors of all medical colleges and hospitals in the state and requested them to continue taking care of patients.

Ms Banerjee, in a communication issued with her official letterhead, requested the senior doctors to take full care of the hospitals and run them smoothly.

“Please take care of all patients. The poor people are coming from all districts. I will be obliged and honoured if you all take full care of the hospitals. Hospitals must run smoothly and peacefully. Thanks for your full cooperation,” Ms Banerjee wrote in the letter.

Medical services have been affected in the state since Saturday’s attack on two junior doctors by relatives of a patient, who had died at Nil Ratan Sircar Medical College and Hospital. One of the junior doctors was grievously injured in the incident.

Highlighting the plight of patients at hospitals due to the ongoing strike by junior doctors, Ms Banerjee on Thursday alleged that some political parties were “provoking” the matter.

In a Facebook post, which came after the striking doctors defied Ms Banerjee’s 2 pm-deadline to join work, she described the injuries sustained by the two junior doctors at NRS Medical College and Hospital as “unfortunate”.

The doctors have been agitating since Tuesday after their two colleagues were attacked allegedly by family of a patient who died during treatment.

Five persons have been arrested in connection with the incident, Ms Banerjee said, adding that an inquiry has also been ordered to look into complaint of negligence during treatment, resulting in the death of the patient. 5 persons have been arrested and their bail prayers were rejected by the court. Our government has taken full care of the injured doctor. We pray that he recovers quickly. As per information received, he is stable and improving,” she added.

“It is the duty of the state government to ensure proper law and order condition in the state. But at the same time we would also like to appeal to the doctors to resume the services as lots of poor patients are suffering,” Mr Mitra said.